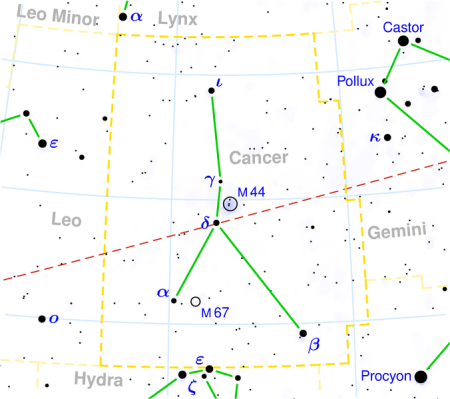 The constellation of Cancer (abbreviation: Cnc) represents the Crab sent by Juno to save the Hydra in its battle with Hercules but unfortunately crushed underfoot during the ensuing melee. It is a dim northern constellation (shaped a bit like Orion) and the fourth sign of the zodiac, located between Castor and Pollux of Gemini and Regulus of Leo.

In former times the Sun used to lie in Cancer when it reached its point farthest north – the time of the summer solstice – but today, because of precession, the Sun passes through Cancer from late Jul to early Aug.

M67 is an open cluster, containing more than 500 stars, which lies at a distance from the Sun of about 2,700 light-years. With an estimated age between 3.2 billion and 5 billion years is the oldest known open cluster in the solar neighborhood, although older ones are known at greater distances.