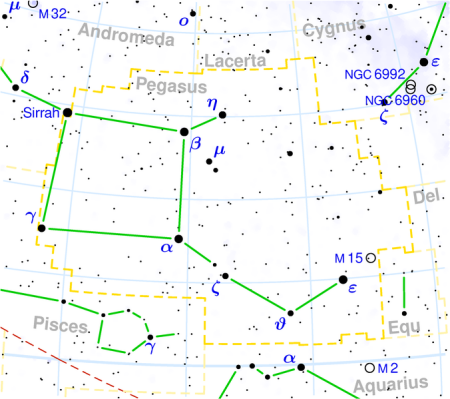 Pegasus (abbreviation: Peg), the Winged Horse, is a large northern constellation. Alpha, Beta, and Gamma Peg, together with Alpha Andromedae (which was originally Delta Peg), form the Square of Pegasus. The most prominent deep-sky object is the globular cluster M15 (NGC 7078), one of the densest of its type and notable for its many variable stars and pulsars (magnitude 6.3; diameter 12.3'; RA 21h 30.0m, Dec +12° 10'). Binoculars and small telescopes show it as a misty patch; telescopes of at last 15-cm aperture resolve individual stars. See below for details of the constellation's brightest stars.

The Square of Pegasus is a large, approximate square of conspicuous stars in an otherwise barren part of the northern sky. Three of the corner-stars, Markab, Scheat and Algenib, belong Pegasus. The fourth, Sirrah, was lost to Pegasus when the constellation boundaries were formalised, and now lies just within the borders of Andromeda.