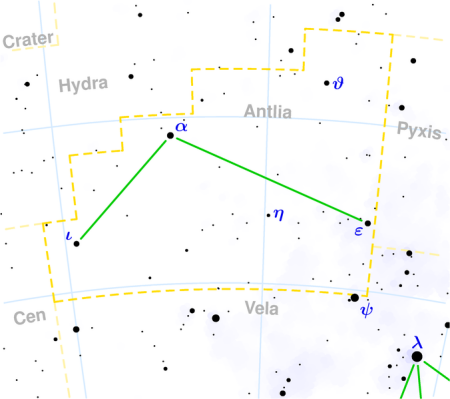 Its brightest star, Alpha Antliae, is a giant K star (visual magnitude 4.28, absolute magnitude -0.98, spectral type K4III, distance 366 light-years). Among its interesting deep-sky objects are the planetary nebula NGC 3132 (RA 10h 4.9m, Dec -40° 11') which is similar in appearance to the Ring Nebula but a magnitude brighter, and the Antlia Dwarf Galaxy.

The Antlia Dwarf Galaxy is a small dwarf spheroidal galaxy, of low surface brightness, that lies about 3.75 million light-years away in the constellation Antlia and is an outlying member of the Local Group. It was discovered only in 1997.

The Antlia Dwarf seems to be dominated by an old stellar population, similar to what has been found for most other dwarf spheroidal galaxies in the Local Group. However, unlike any of these, the Antlia Dwarf seems to contain a cloud of atomic hydrogen gas at its center with a mass of about 800,000 solar masses. It remains to be understood why a galaxy that is relatively gas rich has no young or intermediate-age stars.