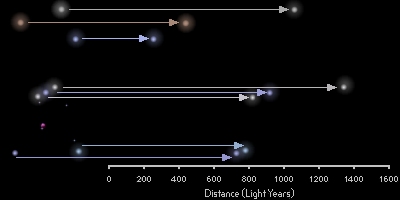 The stars in Orion all look as if they lie at the same distance. Turn the constellation through 90°, however, and the true picture emerges. Credit: ESA

1. A constellation is any grouping of stars in the night sky that forms a recognizable pattern, derived from some mythical or pictorial association.

2. More formally, it is any of the 88 unequal regions into which the celestial sphere is divided by international agreement.


The present constellation boundaries were adopted in 1930 by the International Astronomical Union (IAU) having been drawn up by Eugène Delaporte. They are similar to the rectangular borders of some American states that run exactly north/south or east/west. The constellation boundaries run along lines of declination and right ascension for the epoch 1875 (chosen because this epoch had already been used by Benjamin Gould in defining boundaries for the southern constellations.)

Forty-eight of our present-day constellations were identified by Ptolemy in his great Almagest of the second century AD. Coma Berenices was invented by Gerardus Mercator in 1551 by taking a few stars from Leo. A further 12, in the region around the celestial south pole, were staked out by the Dutch explorers Pieter Keyser and Frederick de Houtman and included on a globe of the sky made by Petrus Plancius in 1598 and then in Johan Bayer's Uranometria star atlas in 1603 (see Bayer's constellations). Jakob Bartsch added three constellations in spaces between existing patterns and is also credited with naming Crux, the Cross, by taking four stars from Ptolemy's original Centaurus. Johannes Hevelius contributed seven more in his star atlas of 1687. Finally, in 1750, during a trip to the Cape of Good Hope, Nicolas de Lacaille penciled in the last 14 of our modern constellations to fill in some star-poor regions between existing groups.

The stars making up a constellation are not actually bound together in close association but just happen to lie in roughly the same direction as seen from the observer's viewpoint. For example, the five brightest stars in the constellation of Cygnus the Swan (comprising an arrangement also known as the Northern Cross) are approximately 74, 270, 410, 750 and 1600 light-years from the Sun. Moreover, the dimmest of the quintet, Gienah (Epsilon Cygni), lies nearest to the Sun while the brightest, Deneb (Alpha Cygni), is the most remote. Were these two stars to exchange places, Deneb, which is intrinsically one of the most luminous stars visible to the naked eye, would outshine Venus in our night sky.

Any future travelers to the stars will quickly grow accustomed to the changing shape of constellations as they cross the interstellar voids. The first groupings to become noticeably distorted from their familiar forms will be those made up largely of nearby stars, such as Cassiopeia (three of the brightest members of which are less than 100 light-years from the Sun) and the Big Dipper (with four stars under 100 light-years away). By contrast, none of the prominent stars in Orion is less than 300 light-years distant and several are between 1,000 and 2,000 light-years from the Sun. Only a very lengthy interstellar voyage would suffice to seriously disturb the Great Hunter's well-known outline.