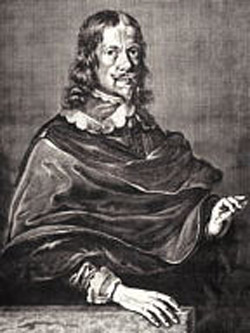 Johannes Hevelius was a Polish astronomer, born in Danzig (Gdansk), best remembered for his careful charting of the Moon's surface. Hevelius (Hewelke) studied Law at Leiden in 1630, then spent the years 1632–1643 traveling to Switzerland, London, and Paris, where he came in contact with various astronomers, including Pierre Gassendi (1592–1655). In 1634 he returned to Gdansk to complete his Law studies while working in his family's brewing business. He started to fully devote himself to astronomy in 1639, tapping into his family wealth to construct a private observatory in his house. His work was also sponsored by the Polish King Jan III Sobieski, through a generous pension. He died in Gdansk on January 28, 1687, the day of his 76th birthday.

Between 1642 and 1645, Hevelius deduced a fairly accurate value for the solar rotation period and gave the first description of the bright markings in the neighborhood of sunspots, calling them "faculae," a name still used. He also observed the planets, especially Jupiter and Saturn. In November 1644, he noted that Mercury goes through phases, as had been predicted by Copernicus. In 1647, he published his Selenographia, the first comparatively detailed lunar map. He realized that the large, uniform gray regions in the lunar disk were low plains, and that the bright contrasting regions represented higher, mountainous relief. He also championed the existence of lunar inhabitants, which he called selenites.

Hevelius planned a new star catalogue of the northern hemisphere to supercede that of Tycho Brahe. This he began in 1657, but his observatory, with some of his notes, was destroyed by fire in 1679. Nevertheless, his observations enabled him to catalogue more than 1,500 stellar positions. The resulting Uranographia contains an excellent celestial atlas with 54 plates and introduces several new constellations, but Hevelius's reliance on the naked eye for estimating positions reduced the value of his work. He observed the variable star Omicron Ceti and christened it "Mira." Hevelius discovered four comets, which he called "pseudo-planetae," and suggested (correctly, in some cases) that these bodies orbited in parabolic paths about the Sun. His wife, Elizabeth Margarethe, shared his interest and assisted him greatly. After his death, she edited his famous work, Prodromus Astronomiae, and published it in 1690. Although little of Hevelius's lunar nomenclature survives, a large crater, 118 km in diameter, on the western border of the Ocean of Storms, is named after him.