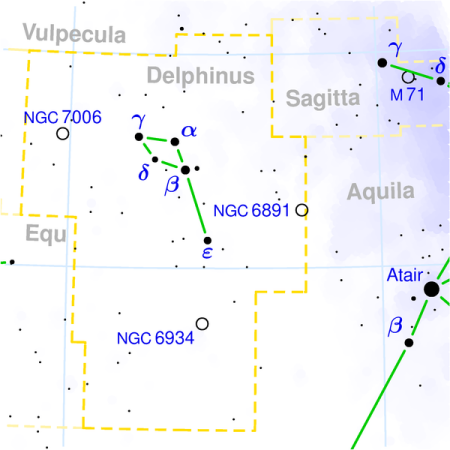 Delphinus (abbreviation: Del), the Dolphin, is a small northern constellation, lying just north of the celestial equator between Pegasus and Aquila. Its four main stars, none brighter than third magnitude, form an asterism known as Job's Coffin. Gamma Del is a wide double that can be resolved by binoculars, magnitudes 4.5 and 5.5.

Among the constellation's interesting deep-sky objects are two planetary nebulae, NGC 6891 and NGC 6905 (the Blue Flash Nebula). Two globular clusters also lie within the boundaries of Delphinus, NGC 6935 and NGC 7006, the latter being on the margins of the Milky Way Galaxy at a distance of about 185,000 light-years.

The region around Delphinus has been an unusually rich hunting ground for novae. See below for details of the constellation's brightest stars and interesting deep sky objects.