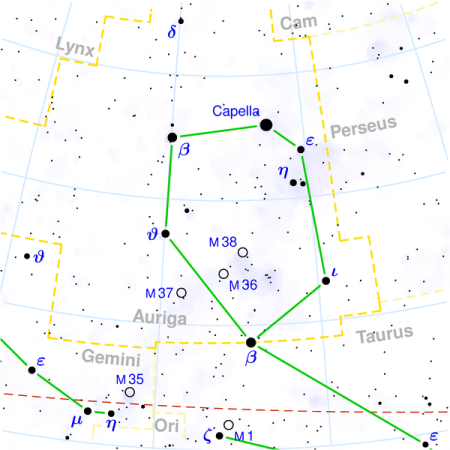 Auriga (abbreviation: Aur), the Charioteer (possibly Erechthonius, son of Vulcan), is among the brightest of northern constellations. It lies midway between Perseus and Ursa Major in a region crossed by the Milky Way, and is the site of the galactic anticenter (the point in the sky diametrically opposite the center of the Galaxy).

Gamma Aur, or El Nath, is shared with Taurus and is universally referred nowadays as Beta Tau. Epsilon Aurigae and Zeta Aurigae are remarkable eclipsing binaries. Together with Eta Aur, they make up the so-called Kids, an asterism which lies just to the south and slightly ahead of Capella (whose name means the "She-Goat"). The most northerly of the trio, Epsilon, is a late addition; in antiquity Zeta and Eta were known respectively as "the western kid" and "the eastern kid." See below for details of the constellation's brightest stars and interesting deep sky objects.