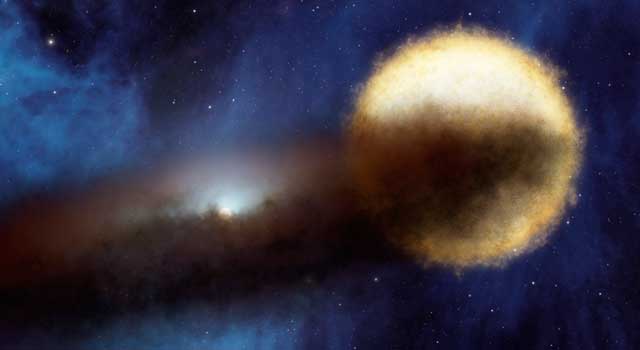 Epsilon Aurigae is one of the strangest and least understood stars in the sky: a binary system, located in the constellation Auriga, in which an enormous yellow-white supergiant is periodically eclipsed by an object that is vastly larger. Its occasionally-used Arabic name, Almaaz, means "the he-goat."

The bright component of Epsilon Aurigae is a hot-end supergiant F star, slightly more than 1 AU in diameter. Large though this is, every 27.1 years the bright star is eclipsed for two years by something of truly colossal proportions. The prevailing idea is that the mysterious dark component is a star surrounded by a thick ring of obscuring dust set nearly edge on. The supergiant we see and the mystery star are perhaps 30 AU apart, the dust ring about the secondary star is some 20 AU in diameter. The ring has some sort of gap in the middle, as Epsilon Aur brightens a bit at mid-eclipse. We have little idea what lies at the center the dusty ring. One theoretical model predicts an object with a mass of 4 solar masses, another with a mass 15 solar masses. It could be one star that has generated a disk through a fierce out-flowing wind or, as more commonly believed, a pair of class B stars that are themselves in tight orbit.

The last eclipse took place in 1982-1984. The next will be in 2009–2011, when a new generation of telescopes will be trained on this stellar enigma in an effort to unlock its mysteries.