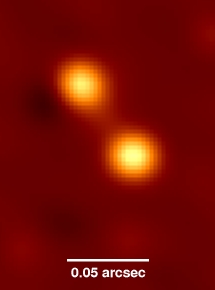 An infrared image of the double star Capella, from an array of telescopes. Credit: COAST / MRAO Cambridge.

Capella (Alpha Aurigae) is a yellow giant G star, the brightest star in Auriga and the sixth brightest in the whole sky. Its Latin name means "the She-Goat".

Capella is a multiple system in which the dominant components are two post-main-sequence G-type stars, each with roughly the same temperature as the Sun, a radius of about 10 times that of the Sun, and a mass of 2.5 solar masses. One has a luminosity of 50 times that of the Sun, the other of 80 times. This pair, separable only by spectroscope, lie less than 100 million km apart and orbit each other every 104.02 days.

Capella is a source of X-rays, probably because of surface magnetic activity similar to that seen on the Sun, but which star is responsible is uncertain. Capella also has a faint companion that is itself a double, made of two dim red dwarf M stars, that orbits almost a light-year away from the main pair.