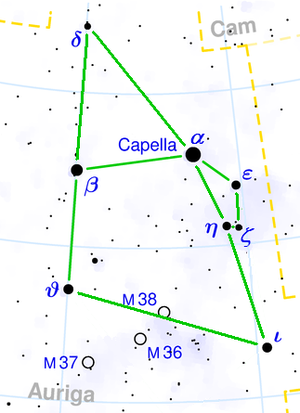 Menkalinan (Beta Aurigae) is the third brightest star in the constellation Auriga. Its Arabic name (also written as Menkarlina) means "the shoulder of the rein-holder." Menkalinan lies just 0.5 arcmin away from the solstitial colure, the great circle in the sky that passes through both celestial poles and the summer and winter solstices. Menkalinan is a binary system consisting of two almost identical subgiant A stars in a tight orbit that, every 3.96 days, results in a partial eclipse of one star by the other by about a tenth of a magnitude. The twins, each about 48 times more luminous than the Sun, are separated by only about one-fifth the distance between the Sun and Mercury. So close are they, that they distort each other into an ellipsoidal shape through mutual tides. A faint red dwarf, well below naked-eye visibility, appears to orbit the pair at least 330 AU away.