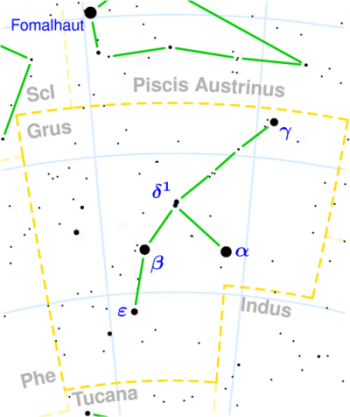 Grus (abbreviation: Gru), the Crane, is a small southern constellation. It lies south of Pisces Austrinus between RA 21h 30m and 23h 25m and Dec -36° and -56°. See below for details of the constellation's brightest stars.

The Grus Quartet (NGC 7552, NGC 7582, NGC 7590, and NGC 7599) is a group of four large spiral galaxies, which are physically very close together and strongly interacting (see galaxy interaction). The high starburst activity of two of the members, NGC 7552 and NGC 7582, is also thought to arise from tidal galaxy-galaxy interactions and subsequent formation of a bar in the disk. Several tidal tails are visible extending from NGC 7582, one pointing toward the neighbors in the east and the other toward NGC 7552, which lies at a projected distance of approximately 30' to the northwest.