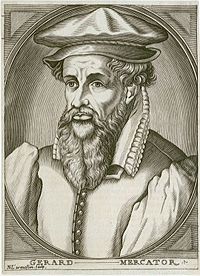 Gerardus Mercator was a Flemish cartographer and calligrapher best known for Mercator's projection. His huge world map of 1859 employed the system of projection now named after him, in which lines of longitude, as well as latitude, appear as straight, parallel lines. The projection is from a point at the center of the Earth through the surface of the globe onto a cylinder that touches the Earth around the equator.

Mercator's scholarship was matched by his practical abilities, and he was respected as the greatest geographer of his time, patronized by Emperor Charles V (1519–56). Mercator also produced a globe (1541) and a huge, unfinished atlas of the world (1595).