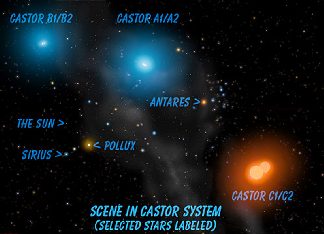 Castor (Alpha Geminorum) is the second brightest star in the constellation Gemini and, in mythology, the twin of Pollux. Though appearing as a single white star to the naked eye, Castor is really a remarkable multiple system, consisting of three stellar pairs.

A modest telescope shows two similar A stars, of mid-second and mid-third magnitude, a couple of arcseconds apart, which orbit each other every 380 years. About 1 arc-minute to the south lies a ninth magnitude third companion that orbits the bright pair at a distance of about 1,000 AU. A spectrograph shows that each of the two bright components, A and B, is itself a double. Castor A consists of almost identical stars, each of about 2 solar masses, orbiting each other every 9.22 days and about one-tenth the distance of Mercury from the Sun. Castor B's twin stars orbit even faster, making their circuit in a mere 2.9 days. The faint, distant star, Castor C, is also double, consisting of nearly identical, low-mass M stars – red dwarfs – with temperatures of about 4,000 K, some two solar diameters apart with an orbital period of 20 hours. One or both are flare stars.

Castor is part of a group of widely dispersed stars known as the Castor Moving Group (see below).

The Castor moving group is an extensive but physically related group of more than 50 stars, including Castor itself, Vega, Fomalhaut, Alderamin, and Zubenelgenubi, that has a common motion through space. The properties of the group suggest an age for its members of 100 to 300 million years.

mythology of Castor and Pollux