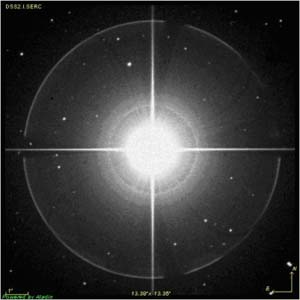 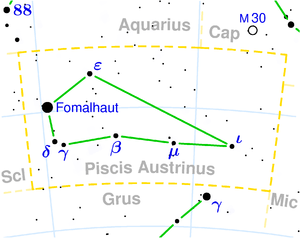 Piscis and Austrinus and Fomalhaut. 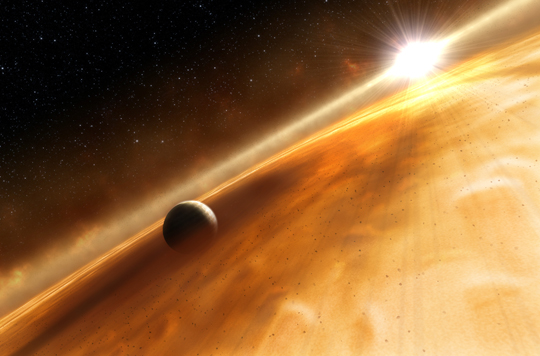 Artist's impression of Fomalhaut and its known Jupiter-type planet and ring of debris. Credit: ESA, NASA, and L. Calcada (ESO for STScI).

Fomalhaut (Alpha Piscis Austrini) is the brightest star in the constellation Piscis Austrinus; its name (pronounced "fo-ma-low") comes from the Arabic "Fum Al Hut" meaning "the fish's mouth." A nearby main sequence A star, Fomalhaut was found by the Infrared Astronomy Satellite to have a dust disk, similar to that around Vega, and four times the size of the Sun's planetary system.

In 2004, a coronagraph on the Hubble Space Telescope produced the first-ever resolved visible-light image of the region around Fomalhaut, clearly showing a ring of protoplanetary debris approximately 21.5 billion miles across and having a sharp inner edge. This large debris disk is similar to the Kuiper Belt, which encircles the Solar System and contains a range of icy bodies from dust grains to objects the size of dwarf planets, such as Pluto.

In 2005, Paul Kalas, of the University of California at Berkeley, and colleagues proposed that the dust disk around Fomalhaut was being gravitationally modified by a planet lying between the star and the ring's inner edge. Circumstantial evidence came from Hubble's confirmation that the ring is offset from the center of the star. The sharp inner edge of the ring is also consistent with the presence of a planet that gravitationally shepherds ring particles. Other researchers subsequently reached similar conclusions.

In 2008, in the November 14 issue of Science magazine, it was revealed that the Hubble Space Telescope had photographed a point source of light lying 1.8 billion miles inside the ring's inner edge. Fomalhaut b, as it was named, is 1 billion times fainter than the star. Observations taken 21 months apart by Hubble's coronagraph show that the object is moving along a path around the star, and is therefore gravitationally bound to it. The planet is 10.7 billion miles from the star – about 10 times the distance of the planet Saturn from the Sun – and completes an orbit every 872 years. It is brighter than expected for an object of three Jupiter masses. One possibility is that it has a Saturn-like ring of ice and dust reflecting starlight, which might eventually coalesce to form moons. The ring's estimated size is comparable to the region around Jupiter and its four largest orbiting satellites.

Fomalhaut is only about 200 million years old and may offer a glimpse of what our own Solar System was like some 4.3 billion years ago.