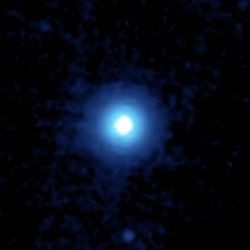 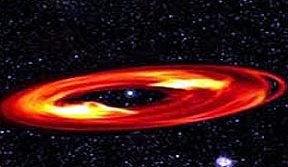 Artist's impression of the dust disk around Vega

In 1983, based on observations by the Infrared Astronomy Satellite (IRAS), Vega became one of the first stars to be discovered with a large luminous infrared-radiating halo that suggests a circumstellar cloud of warm dust. Since Vega seems to be rotating with its pole directed toward Earth, the dust cloud probably represents a face-on disk that may not be unlike the disk surrounding the Sun and that contains the planets. Observations carried out by Helen Walker of the Rutherford Appleton Laboratory, England, and associates, using the Infrared Space Observatory, have shown that the Vegan disk contains particles 200 microns across, or 200 times larger than a typical interstellar dust grain.

In 2002, astronomers announced that two prominent peaks of dust emission around Vega, one offset 60 AU to the southwest of the star, and the other offset 75 AU to the northeast, could be best explained by the dynamical influence of an unseen planet in an eccentric orbit. A massive planet in an eccentric orbit within an in-spiraling dust cloud doesn't create a simple ring like the Earth. Instead, calculations show that an eccentric planet traps dust in two main concentrations at different distances from the star, at positions outside the planet orbit that are generally not in line with the star. Computer simulations show that this effect appears over a wide range of planet masses and orbital eccentricities. It isn't seen in our Solar System because the orbits of the Sun's planets don't have large enough eccentricities. Since quite a number of known massive extrasolar planets follow highly eccentric orbits, asymmetric dust concentrations may be common features of extrasolar planetary systems. Physical scenarios other than the resonant interactions of a planet might create a dust peak, like the recent collision of very large asteroids. For two such major collisions to happen on opposite sides of Vega at nearly the same time is extremely unlikely, but it can't be ruled out with the current data.

If planets are present, they are unlikely to harbor life. With a mass of more than 3 solar masses, Vega has a life-expectancy as a main sequence star of only about 200 million years, which is probably too short to allow even primitive creatures to evolve.

A beacon in orbit around Vega was the source of the radio message picked up by the SETI team in Carl Sagan's novel Contact.