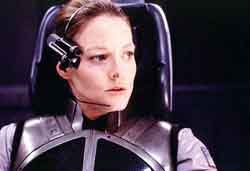 Contact is a science fiction novel (1985) by Carl Sagan which portrays, with technical authenticity, the sequence of events that might follow the receipt of an interstellar message. Some of the characters are loosely based on actual members of the SETI community, while the wormhole transport system employed later in the novel was investigated theoretically by the physicist Kip Thorne and his colleagues at the California Institute of Technology. A film of the same name, starring Jodie Foster, was released in 1997.1

In 2011, Foster, who played the character of Ellie Arroway in Contact, donated an undisclosed amount to the appeal by the SETI Institute to raise $200,000 to take the Allen Telescope Array, used to search for extraterrestrial radio signals, out of mothballs.