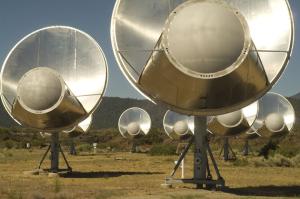 Galactic reach of the ATA.

The Allen Telescope Array (ATA) is an array of 42 radio telescopes (previously known as the One Hectare Telescope), which is used extensively for SETI in parallel with other astronomy. The array consists of commercial satellite dishes fitted with sensitive but inexpensive, purpose-built receivers, enabling a high-performance instrument to be constructed at a fraction of the cost of a single large dish and receiver. The useful frequency range is from under 1 GHz to between 10 and 25 GHz.

The ATA, named for Microsoft Corp. co-founder Paul Allen, who donated some of the $12.5 million construction costs, is the world's largest observatory facility devoted substantially to the search for intelligent signals from space. It is located alongside the Hat Creek Observatory of the University of California, Berkeley, near Mount Lassen in northern California. The Array went into operation in 2007 and the first science results were announced in August 2009. In April 2011, observations were put on hold due to a shortage of funding.