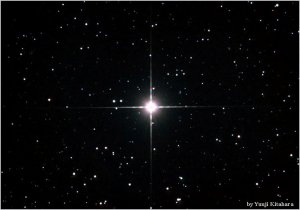 Pollux (Beta Geminorum) is the brightest star in the constellation Gemini (despite its Beta designation), and the 17th brightest in the sky. Pollux is a giant orange K star that makes an interesting color contrast with its white "twin," Castor. Evidence has been found for a a hot, outer, magnetically-supported corona around Pollux, and the star is known to be an X-ray emitter.


Discovery of a planet around Pollux

mythology of Castor and Pollux