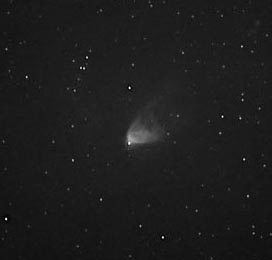 Hubble's Variable Nebula (NGC 2261) is a cometary nebula (a type of reflection nebula) in the constellation Monoceros whose apex star is the peculiar variable R Monocerotis. The variability of R Mon was discovered at Athens Observatory in 1861, but it was not until 1916 that Edwin Hubble discovered that the nebula itself varies, over timescales as short as a few weeks. Carl Lampland at Lowell Observatory carried out a 30-year study of the nebula and found that it changed in apparent size by as much as 1 arcsec in 4 days butt that its variability was not synchronized with changes of brightness in R Mon itself. The nebula's variability is presumed to be due to dust clouds orbiting close to the star, blocking its light and casting shadows.

NGC 2261 is a source of CO emission and has a temperature of about 810 K. It glows at magnitude 10 and has a high surface brightness, making it an easy object for an amateur 8-in telescope.