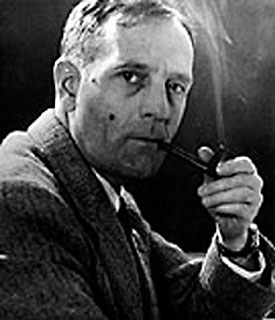 Edwin Hubble was an American astronomer whose observations proved that galaxies are "island universes," not nebulae inside our own galaxy. His greatest discovery was the linear relationship between a galaxy's distance and the speed with which it is moving, now known as the Hubble law.

Upon graduation from the University of Chicago, Hubble won a Rhodes scholarship and earned a law degree at Oxford University. After obtaining his doctorate he spent his career, aside from army service in both world wars, at Mount Wilson Observatory where he used the 100-in (2.5-m) telescope.

In 1923 to 1925 he identified Cepheid variables in the "nebulae" NGC 6822, M31 (the Andromeda Galaxy), and M33 (the Triangulum Galaxy) and proved conclusively that they are outside the Galaxy. His investigation of these and similar objects, which he called extragalactic nebulae and which astronomers today call galaxies, led to his now-standard classification system of elliptical, spiral, and irregular galaxies, and to the proof that they are distributed uniformly out to great distances. Hubble measured distances to galaxies and, with Milton Humason, extended Vesto Slipher's measurements of their redshifts. In 1929 he published the velocity-time relation which, taken as evidence of an expanding universe, is the basis of modern cosmology; the constant in this relation is called the Hubble constant.

The Hubble Space Telescope is also named in his honor.

The Hubble law is the empirical rule that governs the rate of expansion of the universe. It is simply that the velocity of recession of a galaxy, v, is directly proportional to its distance from the observer, r. The Hubble constant is the proportionality factor in this law.

Although misattributed to him, the idea that the universe is expanding did not originate with Edwin Hubble, despite his paper of 1929 detailing his work at the Mount Wilson. Using its 100-in (250 cm) mirror, Hubble was able to detect redshifts in the light spectrum of galaxies and concluded that they were moving away from each other at almost an unfathomable rate. The further away the galaxy was, he said, the faster it was travelling. His discovery also enabled him to estimate the approximate point at which this expansion began, and so the Big Bang theory of the birth of the universe was born. The problem was, however, that two years earlier his conclusion had already been arrived at and published by the Belgian-born physicist and secular priest Georges Lemaître.

In 1927, while a part-time lecturer at the Catholic University of Louvain in Belgium, Lemaître published a paper with the exhausting title: "A Homogeneous Universe of Constant Mass and Growing Radius Accounting for the Radial Velocity of Extragalactic Nebulae." In it he postulated an expanding universe, and chided Albert Einstein for taking exception to his theory – "Your math is correct, but your physics is abominable." Lemaître even suggested a "rate of expansion," later called the Hubble constant. Unfortunately Lemaître's conclusions were published in a little-known Belgian scientific journal and were largely overlooked by the worldwide astronomical fraternity.

In 1917 Einstein had allowed for an expanding universe in a model he created based upon his theory of general relativity, but later, in what he described as "the biggest blunder of my career," he revised and dismissed the theory. In 1931 Einstein paid Hubble, not Lemaître, a visit, and thanked him for his pioneering work, although he later acknowledged Lemaître's theory in 1933.