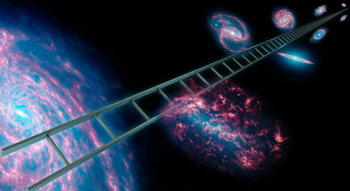 The cosmic distance ladder, symbolically shown here in this artist's concept, is a series of stars and other objects within galaxies that have known distances. Image credit: NASA/JPL-Caltech. 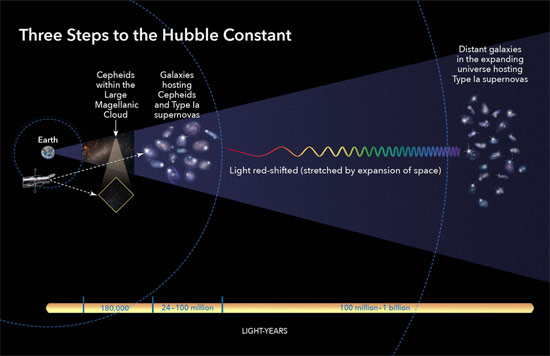 This illustration shows the three basic steps astronomers use to calculate how fast the universe expands over time, a value called the Hubble constant.

The Hubble constant (H0) is a measure of the present expansion rate of the universe, in units of kilometers per second per megaparsec (km/s/Mpc). It relates the apparent recession velocity of a galaxy, or galaxy cluster, to its distance from the Milky Way. The larger the Hubble constant, the younger the universe.

Using data from the Spitzer Space Telescope, astronomers produced in 2012 the most accurate value yet for the Hubble constant: 74.3 plus or minus 2.1 km per second per megaparsec (a megaparsec being roughly 3 million light-years). This brings the uncertainty in the value of the constant down to a mere 3 percent.

The Hubble constant is named after the American astronomer Edwin P. Hubble whose observations in the 1920s confirmed that the universe has been expanding since it exploded into being in the Big Bang (now known to have happened about 13.7 billion years ago). In the late 1990s, astronomers found that the expansion is accelerating, or speeding up over time. Determining the expansion rate, expressed as the Hubble constant, is critical for understanding the age and size of the universe.

All the steps involve building a strong cosmic distance ladder, by starting with measuring accurate distances to nearby galaxies and then moving to galaxies farther and farther away.

This "ladder" is a series of measurements of different kinds of astronomical objects with an intrinsic brightness that researchers can use to calculate distances.

Among the most reliable for shorter distances are Cepheid variables, stars that pulsate at predictable rates that indicate their intrinsic brightness. Astronomers recently used the Hubble Space Telescope to observe 70 Cepheid variables in the nearby Large Magellanic Cloud to make the most precise distance measurement to that galaxy.

Astronomers compare the measurements of nearby Cepheids to those in galaxies farther away that also include another cosmic yardstick, exploding stars called Type Ia supernovas. These supernovas are much brighter than Cepheid variables. Astronomers use them as "milepost markers" to gauge the distance from Earth to far-flung galaxies.

Each of these markers build upon the previous step in the "ladder." By extending the ladder using different kinds of reliable milepost markers, astronomers can reach very large distances in the universe.

Astronomers compare these distance values to measurements of an entire galaxy's light, which increasingly reddens with distance, due to the uniform expansion of space. Astronomers can then calculate how fast the cosmos is expanding: the Hubble constant.