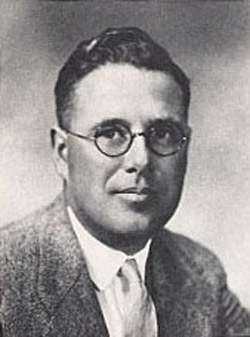 Milton Humason was an American astronomer who worked with Edwin Hubble on the survey of galactic redshifts that led to the discovery of the expanding universe. Having dropped out of school, he became a mule driver for the pack-trains that traveled the trail between the Sierra Madre and Mount Wilson during construction work on the Observatory. In 1911 he married the daughter of the Observatory's engineer and became a foreman on a relative's range in La Verne, but in 1917 he joined the staff of Mount Wilson Observatory as a janitor and was soon promoted to night assistant. In 1919 George Hale, the observatory's director, recognized Humason's unusual ability as an observer and appointed him to the scientific staff. He became involved with Hubble's study of galaxies and personally developed a technique for determining the exposures and plate measurements. Between 1930 until his retirement in 1957, Humason measured the redshifts of 620 galaxies, first using the 100-in (2.5-m) telescope at Mount Wilson and then the 200-in (5-m) reflector at Palomar. He also applied the techniques he developed for recording spectra of faint objects to the study of supernovae, old novae that were well past peak brightness, and faint blue stars (including white dwarfs). During his studies on galaxies he also discovered comet 1961e, notable for its large perihelion distance.