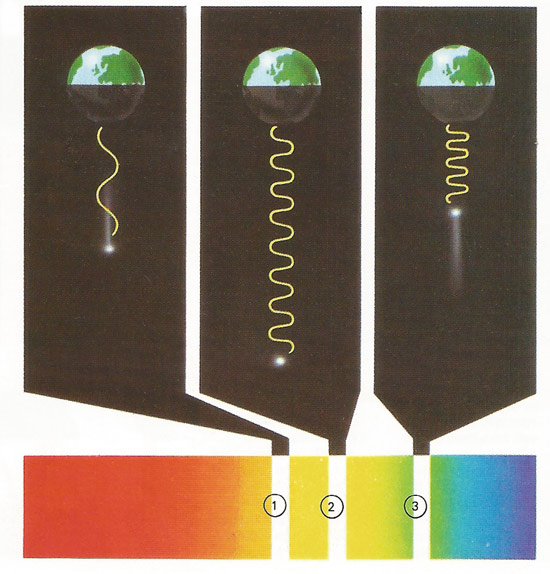 Fig 1. The motion of an observer does not affect the velocity of light but it does change the color or wavelength of light to give the Doppler effect. However, only stars and galaxies move fast enough to show the effect. If the star and the observer are moving apart [A] the wavelength increases because the individual waves are encountered less frequently. The light is more red than if the star were stationary [B] and this red shift shows as a shift in the lines of the spectrum of the star from [2] to [1]. If a star and observer are approaching [C], wavelength decreases and the light appears bluer [3]. A similar shift of frequency is used in radar to detect the movement of aircraft or cars.

The change in pitch, or frequency, of a sound which results when a source of sound and its observer are moving relative to one another was first predicted by the Austrian physicist and mathematician Christian Andreas Doppler (1803–1853) in a paper on double stars published in 1842. He showed that if the source was approaching the observer (or the observer was approaching the source) then the sound waves would be more crowded (and hence the pitch higher) than if both source and observer were stationary.

A sound of a certain steady frequency f, will emit f complete sound waves (a series of push and pull changes in pressure) in one second. If the source is stationary relative to the observer, the observer's ears receive f sound waves in a second, so that the observer hears the actual sound that was given out by the source. However, if the source is moving, this motion causes the air ahead of the source to be compressed by the vibrations more than f times in a second, while the air behind is compressed less less than f times in a second. As a consequence an observer in front of the approaching sound actually hears a sound of higher frequency, since more than f vibrations reach her in a second. After the source of sound has passed her the number of vibrations reaching her in a second is less than f so she hears a sound of lower pitch than the source.

Until the advent of railways, there were no vehicles capable of traveling fast enough for there to be any noticeable Doppler effect. (Horse-drawn mail coaches traveled at about 16 km/h.) The first recorded demonstration of the Doppler effect was carried out in 1845 by C. H. D. Buys-Ballot, the Dutch scientist who is chiefly remembered for his contributions to meteorology. He used a trumpet as the source of sound which was conveyed in a railway locomotive.


Light and the Doppler effect

Light and sound are both forms of wave motion, and the Doppler effect is also observed where a source of light, such as a distant star, is moving along the line of sight. Whereas a change in frequency of sound is heard as a change in the pitch of a note, a change in frequency in light is seen as a change in color of light. Light of high frequency (and short wavelength) gives the sensation or color we know as blue; light of low frequency (and long wavelength) gives the sensation or color we know as red. hence a decrease in frequency in light means a change in color from blue to green or green to yellow or yellow to orange or orange to red. The spectra of stars and galaxies that are traveling away from the Earth suffer what is known as a redshift while luminous objects that are approaching Earth have spectra with a blueshift. A shift in the pattern of lines observed in the spectrum of a star or galaxy is useful to astronomers since it gives an indication both of the direction and of the speed of the object.

A redshift is the displacement of spectral lines in the spectrum of an object toward longer wavelengths. If caused by the line-of-sight recession of the object, as is usually the case, this displacement, when measured, allows the recessional velocity to be calculated. Redshift is given by the formula:

The cosmological redshift is the redshift produced by the expansion of the universe and the reason most galaxies in the universe have redshifts. Contrary to popular belief, this is not a Doppler shift. A Doppler redshift arises when an object moves away from us. Most galaxies move away from us, but this is not the cause of their redshifts. Instead, as a light wave travels through the fabric of spacetime, the universe expands and the light wave gets stretched and therefore redshifted. This is a subtle but importance difference. The farther a galaxy, the longer its light waves have traveled through space and the more redshifted they have become.

A blueshift is a general displacement of spectral lines to shorter wavelengths that happens when a source of electromagnetic radiation moves toward the observer: the greater the velocity of approach along the line of sight, the greater the blueshift. Individual stars within the Milky Way Galaxy frequently show blueshifts. However, with the exception of a few galaxies within the Local Group, including the Andromeda Galaxy, most extragalactic objects exhibit redshifts, due to the overall expansion of the universe.

Doppler boosting is an effect, predicted by the special theory of relativity, that enhances the radiation from material that is moving toward the observer at nearly the speed of light, and hides material moving in the opposite direction at such speeds. For example, if there are many quasars with radio jets moving at relativistic speeds, the strongest radio sources will be those that are most nearly pointed in our direction. This is important in understanding blazars and superluminal radio sources.

Doppler tracking is the most common method of tracking the position of vehicles in space. It involves measuring the Doppler shift of a radio signal sent from a spacecraft to a tracking station on Earth, this signal either coming from an onboard oscillator or being one that the spacecraft has coherently transponded in response to a signal received from the ground station. The second of these modes is more useful for navigation because the returning signal is measured against the same frequency reference as that of the originally transmitted signal. The Earth-based frequency reference is also more stable than the oscillator onboard the spacecraft.