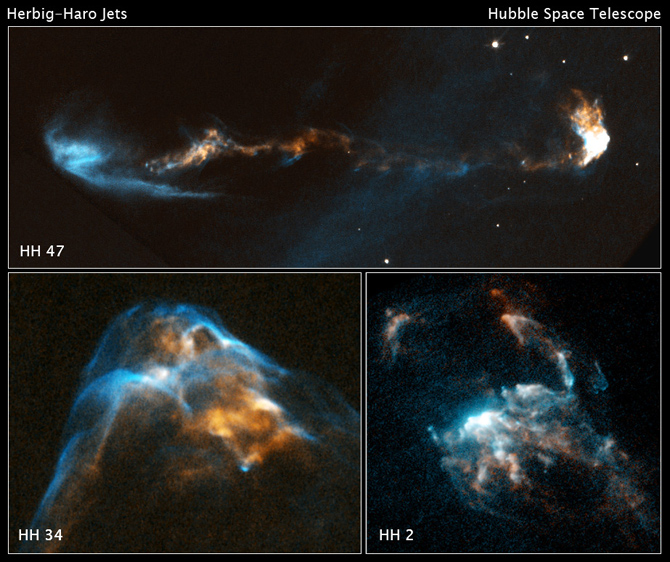 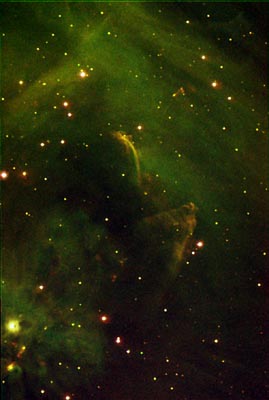 A Herbig-Haro object is a small bright nebula in a star-forming region, created when fast-moving (about 150 km/s) jets of material from an infant star collide with the interstellar medium. As the bipolar flow from a young star plows into the surrounding gas, it generates strong shock waves that heat and ionize the gas. In the cooling gas behind the shock front, electrons and ions recombine to give an emission line spectrum characteristic of Herbig-Haro objects. They are named after the American astronomer George Herbig (1920–2013) and Guillermo Haro who discovered the first three such objects in 1946–47 in images of the nebula NGC 1999 in Orion. All known Herbig-Haro objects have been found within the boundaries of dark clouds and are strong sources of infrared.

Astronomers are still not clear what role jets play in the star-formation process or exactly how the star unleashes them. The jets appear to work in concert with magnetic fields. This helps bleed excess angular momentum from infalling material that is swirling rapidly. Once the material slows down it feeds the growing protostar, allowing it to fully condense into a mature star.