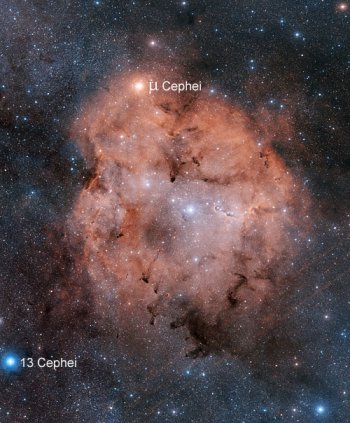 Mu Cephei, the Garnet Star, and IC 1396. This image is a composite from B&W images taken with the Palomar Observatory's 48-in Samuel Oschin Telescope as a part of the 2nd National Geographic Palomar Observatory Sky Survey. The images were recorded on 2 types of photographic plates, one sensitive to red light and the other to blue, and then digitized. Credit: Davide De Martin.

The Garnet Star (Mu Cephei) is a very luminous red supergiant, one of the largest and brightest stars visible not only to the naked eye but in the entire Galaxy. It lies in the constellation Cepheus and is associated with a large region of nebulosity known as IC 1396 or the Garnet Star Nebula (see below).

Even at its great (uncertain) distance, Mu Cephei is big enough to show a measurable angular diameter, of around 0.02", equivalent to about 15 astronomical units across. This means that if put in place of the Sun, it would extend midway between the orbits of Jupiter and Saturn.

As is the case with most huge supergiants, the Garnet Star is variable, wobbling in brightness by over a magnitude in a somewhat irregular way over a period of 2 to 2.5 years. The average magnitude varies over a period of a decade or so and dips as low as fifth magnitude. At the same time it is losing mass through a strong wind.

Although the Garnet has certainly stopped internal hydrogen fusion, its exact evolutionary status is uncertain. Most likely, it is fusing helium in its core into carbon. Whatever the conditions, this great star is almost certainly destined to explode as a supernova.

The Garnet Star Nebula (IC 1396) is a large dusty emission nebula that It is ionized by the luminous blue star HD 206267, which lies near its center. IC 1396 lies approximately 3,000 light-years away and sprawls across roughly 3 degrees of the sky (equivalent to several hundred light-years), making it one of the largest emission complexes visible from Earth. The snake-like formation visible on its right flank in this photo is VDB 142. The prominent star at top is Mu Cephei.

The Elephant's Trunk Nebula is an elongated dark globule within the Garnet Star Nebula (IC 1396). The globule is a condensation of dense gas, compressed by the surrounding ionized gas, which is barely surviving the strong ionizing radiation from a nearby massive star.