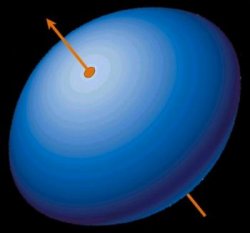 Achernar is extremely flattened by its rapid spin. Image: ESO.

Achernar (Alpha Eridani) is the ninth brightest star in the sky but one that is not well known to northern observers as it can only be seen at latitudes below 32° N. Its name, derived from the Arabic Al Ahir al Nahr, means "the end of the river" and refers to its location at the southernmost point of the constellation Eridanus.

Achernar's high spin velocity of at least 250 km/s has led to it becoming a Be star. Observations by the Very Large Telescope, published in 2003, reveal that it is extraordinarily flattened, with an equatorial radius 50% larger than its polar radius. The high degree of flattening measured for Achernar – a first in observational astrophysics – now poses an unprecedented challenge for theoretical astrophysics. The effect can't be reproduced by common models of stellar interiors unless certain phenomena are incorporated, e.g., meridional circulation on the surface ("north-south streams") and non-uniform rotation at different depths inside the star. Achernar also shows small, regular light variations of a type that make it a Lambda Eridani star.