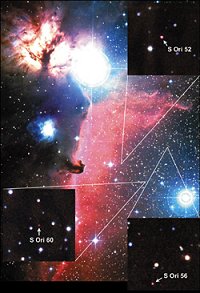 Possible rogue planets in the region of the Orion Nebula.

A rogue planet is a planet that has escaped the gravitational pull of its host star and is moving freely through interstellar space. Evidence is mounting that such unattached worlds are common.

New theoretical models devised to account for the unusual orbits of epistellar jovians and eccentric jovians suggest that planetary formation may be a much more dynamic process than had previously been supposed. The interplanetary billiards which, it seems, routinely take place in embryonic systems of worlds – especially those which initially have several Jupiter-class objects – may often lead to planets being hurled away from their home stars on exit trajectories. Other theoretical models suggest that planets may also be frequently ejected into interstellar space if they form in binary or multiple star systems.

Actual examples of rogue planets may have been detected in the region of the Trapezium cluster in the Orion Nebula. According to the results of a study published in 2000, 13 sub-stellar objects detected in Orion fall below the mass limit required for a body to instigate deuterium burning and become a brown dwarf.1, 2

At first sight, it seems that escaped worlds, without sun-like stars to warm them, would surely be lifeless. Yet, according to one suggestion, the possibility of inhabited Earth-like planets roaming the interstellar void can't be ruled out. If a terrestrial-sized planet was thrown free of its planetary system within a few million years of its formation it might still be swathed in hydrogen. This hydrogen envelope would prevent much of the heat generated internally by radioactivity from escaping, keeping the rogue planet warm and possibly replete with liquid water. Volcanic activity and lightning might supply the local temperature variations conducive to the emergence of at least primitive forms of life. See also L1551 (IRS5).

Several rogue planets inhabit the universe of Star Trek. These include the Founders' homeworld, which is said to lie in the Omarion Nebula (DS9: "The Search, Part I"), Trelane's planet of Gothos (TOS: "The Squire of Gothos"), and the subject of the ENT episode "Rogue Planet". A rogue planet also features on the 1951 film, The Man From Plant X. Greg Bear's novel Rogue Planet is set in the Star Wars universe.