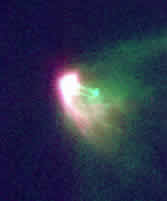 L1551 (IRS5) is an object previously believed to be a young star in the Taurus molecular cloud complex – a giant cloud of gas and dust lying at a distance of 450 light-years (140 pc) in the constellation Taurus. In 1998, observations with the Very Large Array (VLA), by Luis Rodriguez of the Autonomous National University of Mexico and his colleagues,1 showed that it was in fact a close binary pair of protostars separated by only 45 astronomical units (AU) (6.75 billion km), or slightly more than the Sun-Pluto distance. Around each component, VLA images revealed an orbiting dust disk, extending out to 10 AU, or about as far as the orbit of Saturn.

Similar protoplanetary disks have been observed around single stars, but the L1551 disks are about 10 times smaller, their size being limited by the gravitational effect of the neighboring star. The discovery is important because it shows that protoplanetary disks, albeit of more restricted size, can exist in close binary star systems. Each disk contains about 0.05 solar masses of material, which is similar to the mass content of the solar system. Had the stars been much closer together, the gravitational effects of both would have disrupted the disks. As a result, if planetary systems do form in the L1551 pair, they will be among the nearest neighboring sets of planets in the Galaxy. In commenting on the discovery, astrophysicist Alan Boss suggested that if a giant planet were to form close to the edge of one of the disks, it might be ejected from the system by the gravitational effect of the companion.