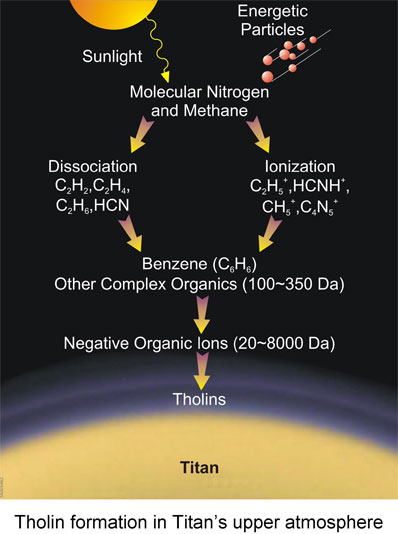 A tholin is any member of a family of large, complex organic molecules that form by the action of ultraviolet light on simpler organic molecules. Tholins are thought to be among the chemical precursors to life.

Tholins, which are generally reddish brown in color, do not exist naturally on Earth because the present oxidizing atmosphere of our planet blocks their synthesis. However, tholins can be made in the lab by subjecting mixtures of methane, ammonia, and water vapor to simulated lightning discharges. Conditions like this probably exist in many places in the universe, including the icy moons of the outer Solar System.

The presence of tholins may help explain the orange-red hue of Titan's atmosphere and the reddish surface of some Centaurs and outer asteroids.

In 2007, a team of scientists at Southwest Research Institute, the University of Kansas, University College London, and The University of Texas at San Antonio, described a new model of tholin formation in Titan's atmosphere (see illustration) based on findings by the Cassini spacecraft. These included the detection of benzene (a critical component in the formation of aromatic hydrocarbon compounds) in Titan's atmosphere and large positive and negative ions at low altitudes. The detection of the negative ions, in particular, surprized researchers and suggests these ions may play an unexpected role in making tholins from carbon-nitrogen precursors.1

In 2008 came the announcement of the discovery of tholins in an extrasolar dust disk surrounding the young star HR 4796A.