Fig 1. Three views of Titan from observations by the Cassini spacecraft. Left: a natural color composite made from images taken through three filters sensitive to red, green, and violet light, showing roughly how Titan would appear to the human eye. Center: a near-infrared composite revealing the surface. Right: a false-color composite of one visible-light and two infrared images. Green areas are where Cassini can see the surface; red represents regions high in Titan's stratosphere. Taken on April 16, 2005, at distances ranging from 168,200 to 173,000 km. Credit: NASA/JPL. 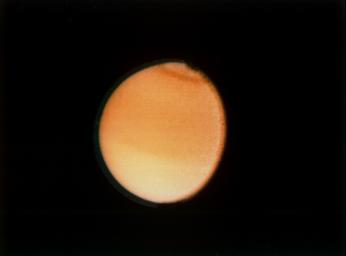 Fig 2. Voyager 2 photo of Titan, taken August 23, 1981, from a range of 2.3 million km. The southern hemisphere appears lighter, a well-defined band is seen near the equator, and a dark collar is evident at the north pole. All these bands are associated with cloud circulation in Titan's atmosphere. Credit: NASA/JPL. 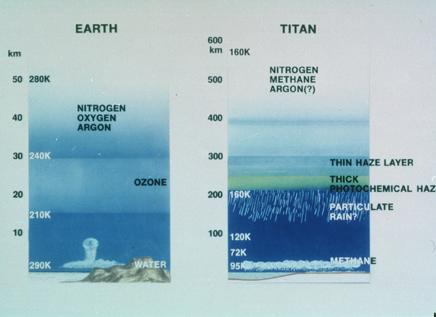 Fig 3. Comparison of the atmosphere of Earth with a model of that of Titan. 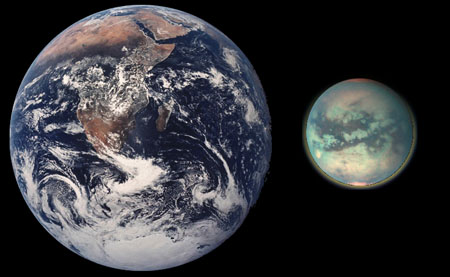 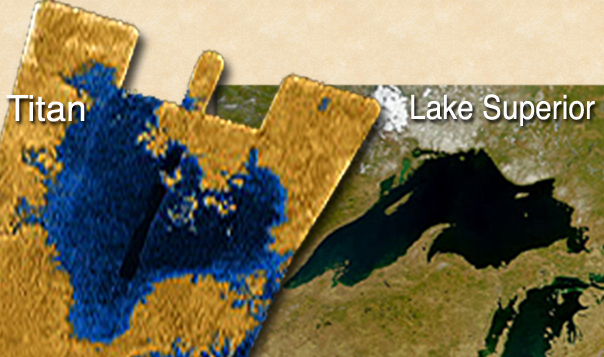 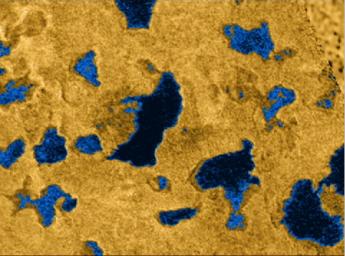 Titan is he largest moon of Saturn and the second largest moon in the Solar System, after Ganymede. Titan is bigger than the planet Mercury, although only half as massive. It is the only moon in the Solar System to have a dense atmosphere (10 times deeper than Earth's and with a surface pressure 60% greater). Until the arrival in orbit around Saturn of the Cassini-Huygens spacecraft, in 2004, little was known about the surface of Titan because of the obscuring effect of an orange haze in the atmosphere.

Titan was discovered by the Dutch scientist Christiaan Huygens on March 25, 1655 and was the first moon to be found with the aid of a telescope after the four Galilean satellites of Jupiter. Huygens called it simply Luna Saturni (moon of Saturn). However, in keeping with a custom of the time, he didn't announce his discovery openly. Instead, he disguised the news in the form of an anagram, partly using a verse by the Roman poet Ovid, "Admovere Oculis Distantia Sidera Nostris" (They brought the distant stars closer to our eyes), which is etched around the edge of the lens of the telescope that Huygens used. When decoded and translated, the anagram reads "A moon revolves around Saturn in 16 days and 4 hours," a value close to the modern value of Titan's orbital period.

It was John Herschel who proposed the name "Titan" in his 1847 publication "Results of Astronomical Observations made at the Cape of Good Hope." In Greek mythology, the titans were brothers and sisters of Cronos, the Greek equivalent of the Roman god Saturn. Also in the same publication, Herschel named the six other then-known moons of Saturn after individual titans.

The possibility of an atmosphere around Titan first arose scientifically in 1903 when the Spanish astronomer Jose Comas Solá observed that Titan appears brighter at its center than it does at its limb. He suggested that this is because sunlight reflected toward Earth by Titan's limb must pass through more of the moon's atmosphere than sunlight reflected by the center. The existence of an atmosphere was confirmed in 1944 by Gerard Kuiper at the University of Chicago, who identified methane in the spectrum of Titan.

Further observations, notably by the Voyager probes as they flew by in 1980 and 1981, and, more recently, by Cassini-Huygens, have shown the composition of Titan's atmosphere to be 98.4% nitrogen and 1.6% methane, with trace amounts of other gases, including various hydrocarbons (such as ethane, diacetylene, methylacetylene, cyanoacetylene, acetylene, and propane), argon, carbon dioxide, carbon monoxide, cyanogen, hydrogen cyanide, and helium. Apart from Earth, Titan has the only dense nitrogen-rich atmosphere in the Solar System.

The hydrocarbons are thought to form in Titan's upper atmosphere due to reactions involving the breakup of methane by the Sun's ultraviolet light and cosmic rays. This organic photochemistry produces the orange haze, most dense at an altitude of about 300 km (200 miles), which obscures the surface at visible wavelengths and also reflects a substantial amount of infrared back into space giving rise to an "anti-greenhouse effect". Titan is one of only two known bodies – the other is Pluto – whose surface temperature is lower (by about 10K) than it would be if it had no atmosphere. The production of a variety of organic materials in the atmosphere, which presumably drizzle down onto the surface, is one of the reasons Titan is of such interest to astrobiologists (see Titan, prebiotic evolution and Titan, life).

A person standing on Titan's surface during the day would experience only about one thousandth the daylight brightness on Earth's surface. This comparison takes into account not only the thickness of the atmosphere, but also Titan's greater distance from the Sun. Even so, light levels on Titan's surface are 350 times brighter than moonlight on Earth under a full moon.

Because the methane in Titan's atmosphere is being continually depleted, there must be some mechanism on the surface that replenishes it. One possibility is that Titan has active volcanoes, which release methane.

Prior to the arrival of Cassini-Huygens in June 2004, infrared observations by the Hubble Space Telescope had provided a crude map of bright and dark regions on Titan, though the nature of these features remained uncertain. It had been speculated that oceans or lakes of liquid ethane might cover a large fraction of the moon's surface and that liquid methane might fall as rain. According to another model, the bright areas glimpsed by Hubble might be water ice plateaus thrust above lowlands darkened by solid and liquid organic molecules.

A more detailed and accurate picture of Titan began to build up thanks to images and other data sent back by Cassini-Huygens. During its first of more than 40 planned flybys of the big moon, Cassini showed what appear to be methane clouds and a giant impact crater. The most prominent feature seen was a bright region of cumulus-like cloud near the south pole, some 450 km across and about 15 km above the surface. The spacecraft's measurements suggested that the clouds were probably made from hydrocarbons, and might be associated with a ground feature. Cassini revealed some variations in the surface brightness were circular and others are linear. There also appear to be some concentric features near the south pole. This variation in surface detail suggests that Titan is not heavily cratered and that much geologic activity has taken place. 1

A mosaic of nine pictures, taken as Cassini flew past Titan on October 26, 2004 gave astronomers their most detailed view yet of the moon's full disk. Titan's surface features are clearest at the center of the disk, where the probe had the least atmosphere to peer through. There are no visible craters, which implies the moon probably has a young surface that is continually refreshed. Astronomers are still unsure whether the flowing patterns on Titan's surface are caused by volcanic eruptions, shifting plates of rock, wind-blown dust or even rivers of liquid hydrocarbons.

On January 14, 2005, the Huygens probe successfully parachuted down to and landed on the surface of Titan, sending back remarkable pictures both during the descent and on the ground. One stunning black and white image reveals what seem to be drainage channels on a land surface leading out into a dark body of liquid. Another shows a flat surface that is apparently strewn with boulders. Huygens captured more than 300 images as it dived through the moon's atmosphere.

Speaking about the picture of an apparent shoreline, John Zarnecki, principal investigator for the surface science package (SSP) on Huygens said: "If it's not a sea, it could be a lake of tar. And did one see waves?"


Seas and lakes on Titan

The Cassini spacecraft sent back remarkable pictures, using both radar and infrared imagery, of large bodies of liquid on Saturn's largest moon, Titan. These images reveal what appear to be lakes and seas of liquid methane and ethane, most notably in Titan's north polar region. The Cassini image above shows a feature on Titan that covers at least 100,000 sq km (39,000 sq miles), which is greater in extent than Lake Superior (82,000 square km or 32,000 sq miles) – one of Earth's largest lakes (Fig 5). The feature covers a greater fraction of Titan than the largest terrestrial inland sea, the Black Sea. Whereas the Black Sea covers 0.085% of Earth's surface, the observed body on Titan covers at least 0.12% of Titan's surface. Because of its size, scientists have referred to it as a sea.

Fig 6 is an image constructed from radar data supplied by Cassini, shows numerous dark regions in the vicinity of Titan's north pole that appear to be lakes of various sizes together with features commonly associated with lakes on Earth, including islands, bays, inlets, and channels. For more than two decades, scientists have debated whether liquids on Titan exist, and if so, where they would be located. Pre-Cassini observations from the 1980s indicated that something on Titan's surface must be re-supplying the methane to its atmosphere. A global ocean was once hypothesized. Subsequently, disconnected lakes or seas were predicted. The discovery of numerous lakes near Titan's north pole by the Cassini radar instrument in July 2006 has confirmed the latter idea, and indicates an apparent preference during the current season for liquids to be located near the north pole.

While there is no definitive proof yet that the dark, lake- and sea-like features on Titan contain liquid, their shape, their dark appearance in radar that indicates smoothness, and their other properties point to the presence of liquids. The liquids are probably a combination of methane and ethane, given the conditions on Titan and the abundance of methane and ethane gases and clouds in Titan's atmosphere.

Titan is the only world in the Solar System, other than Earth, on which large bodies of liquid are though to exist on the surface, although several worlds, including Europa and possibly Titan itself, are suspected of harboring subterranean reservoirs of liquid.

My video on Titan