Photochemistry in nature. In photosynthesis, light energy absorbed by the chlorophyll in the leaf is used to manufacture starch. Carbon dioxide in the air combines with water in the leaf. Starch is manufactured and oxygen given off. The process ceases when there is no light. If two leaves, one that has been in sunlight and the other in the dark, are boiled in alcohol and then dropped in iodine solution, the "sunlit" leaf turns blue. This shows that starch is present. The other leaf remains unchanged. 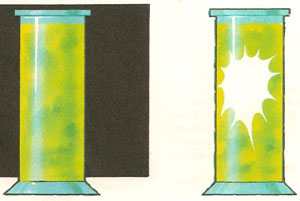 When a mixture of hydrogen and chlorine is kept in the dark nothing happens. When the mixture is illuminated the gas explodes. 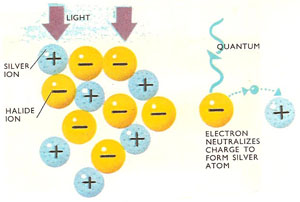 In a photographic emulsion positive silver ions are packed together with negative halide ions in gelatin. A light quantum strikes a halide ion, releasing an electron. This eventually passes to the positive silver ion, where it is neutralized. A latent image consisting of silver specks is produced which is brought out when the film is developed.

If volumes of chlorine and hydrogen gas are mixed together in the dark, nothing much happens. But then, if the mixture is suddenly exposed to strong light, the mass of gas explodes. Why should exposure to light have such a dramatic effect on an apparently harmless mixture of gases? The answer is that this is an example of a photochemical reaction – a chemical reaction that is promoted or speeded up by the absorption of light energy.

There are many examples of this sort of reaction found both in the laboratory and in nature. Perhaps the most important photochemical reaction of all in nature is photosynthesis in which carbon dioxide and water are converted into starch in the leaves of living plants. This process depends on the absorption of sunlight by chlorophyll in the leaves. The net result is that the energy absorbed is stored as chemical energy in the starch. Photosynthesis gets under way only in the presence of light; it slows down and stops when the source of light is removed.

Another example of a photochemical reaction occurs when a photographic plate is exposed. In the film emulsion, silver bromide molecules absorb light energy and are split into silver and bromine atoms. The pure silver bromide is not very reactive to light on its own, but in the presence of a sensitizer like allyl thiocyanate becomes much more sensitive.

There is a marked difference between the reaction in the photographic emulsion and in the chlorine-hydrogen mixture. In the emulsion, single molecules are split one at a time by a single packet or quantum of light energy (a photon). In the chlorine-hydrogen mixture the reaction is on a much more massive scale. In fact a chain reaction is set up. In the first stage of the reaction, a chlorine molecule absorbs light energy and is split up into energy-rich (activated) chlorine atoms:

The activated hydrogen atom in turn reacts with a chlorine molecule to form hydrogen chloride and an activated chlorine atom:

In this way, a single quantum of light can cause reactions in thousands of molecules of hydrogen and chlorine. So a strong source of light, flooding the gas with a large number of quanta, soon makes the whole mass of gas take part in the reaction.

When photochemical reactions were first studied, attempts were made to find the extent of a chemical reaction that occurs when a definite amount of light energy was absorbed by the reagents. Then, following the introduction of the quantum theory of light, Albert Einstein and J. Stark proposed the law of the photochemical equivalent. This stated that every molecule taking part in a photochemical reaction absorbs a single quantum of energy. This law applies only to the primary reaction. If a chain reaction follows the initial reaction then it is obvious that the energy needed for the secondary reactions does not come from the initiating quantum of light. So the law does not apply to these.

The efficiency of a photochemical reaction is defined as the ratio

and this is equal to one if a single quantum decomposes a single molecule. If a chain reaction follows the initial reaction then the efficiency can be 1, 2, 3 or any whole number.

Some molecules simply break up when they absorb light and the fragments carry off the energy. For example, the ozone molecule breaks up into an oxygen molecule and a single oxygen atom:

In other photochemical reactions, the chemical group can be transferred from one part of a molecule to another, and some molecules join together to form polymers when they absorb light. For example, anthracene molecules when dissolved in benzene, forms dianthracene "twins" when the solution is illuminated with ultraviolet light:

The reagents are placed in a reaction cell, made of glass or quartz and flooded with light. The extent of the reaction can be gauged in a number of ways. For example, in the reaction between sulfur dioxide and chlorine gases

only one molecule is formed where there were two before, so that the gas pressure would be halved if all the molecules in the reaction volume were consumed in the reaction. The change in gas pressure gives the proportion of molecules that have taken part. The change is usually very small but there are sensitive methods that can be used to measure small changes in pressure. In any case, to get as large a number of activated molecules as possible a strong light source is used.

Although most photochemical reactions are concerned with the promotion of chemical processes by the absorption of light, sometimes the reaction acts in reverse. In other words, the chemical process leads to light emission. For example, chemical reactions taking place in the firefly produce light (see bioluminescence. In other reactions, the light released is a result of burning or combustion – an example of this is the violent reaction between potassium metal and water.