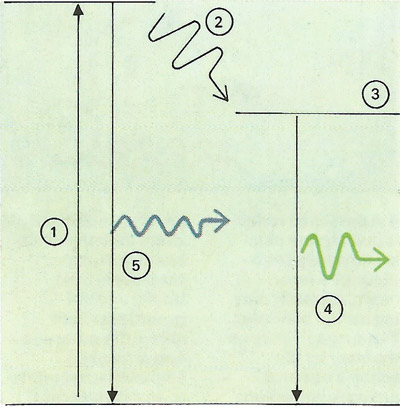 Fig 2. Fluorescence occurs when an atom receives light energy [1] and divides emission of the energy into two stages: a small energy change producing infrared [2] to an intermediate energy state [3] and a large change giving light at a lower frequency than that received [4]. Normal light production occupies one change [5]. Phosphorescence is similar but stage two takes some time.

Fluorescence is a form of luminescence in which a substance emits visible light almost immediately after it has been stimulated or excited by electromagnetic radiation of a different wavelength or by certain other means (such as electrons striking the surface of a TV screen) not involving a rise in temperature. The light is given off within a very short period – arbitrarily set at less than 10 nanoseconds (10-8 s) – after the stimulation continues; in this respect, the phenomenon differs from phosphorescence.

Fluorescence of certain rocks and other substances had been observed for many years before its nature was understood. The British scientist George Stokes coined the term when he discovered, in 1852, that the mineral fluorite (fluorspar) emitted red light when it was illuminated by ultraviolet radiation (Fig 1). He formulated what became known as Stokes's law, which states that the wavelength of the fluorescent light is always greater than that of the exciting radiation (though exceptions to this law were subsequently found). Later it was discovered that certain organic and inorganic substances can be made to fluoresce by activation not only with ultraviolet light but also with visible light, infrared radiation, X-rays, radio waves, cathode rays (streams of electrons), friction, and pressure.

Fluorescence is now explained in terms of electrons inside certain molecules, having been raised to allowed higher energy levels, falling in two or more steps to their original states with the emission of light at specific wavelengths (Fig 2).

Fluorescein is a synthetic dye made by fusing resorcinol with phthalic anhydride (see acid anhydride) and zinc chloride catalyst. A red crystalline solid, fluorescein dissolves in alkalis to give a deep red solution showing very intense yellow-green fluorescence, visible at very low concentrations. It is used as a water tracer, and was used in World War II to mark spots on the sea.