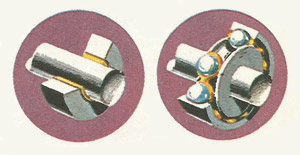 The amount of friction set up by a wheel turning on its axis can be considerably reduced by the use of balls or rollers.

The coefficient of friction is a number characterizing the force necessary to slide or roll one material along the surface of another. If Fs = the frictional resistance when a body is on the point of sliding along a specified surface, Fk = the frictional resistance when steady sliding has been attained, and R = the perpendicular force between the surfaces in contact, the static coefficient of friction = Fs/R; the kinetic friction = Fk/R.


Examples of friction in everyday life

Anyone trying to push a boat over a dry, level beach meets with a considerable opposition. The force which tends to oppose every sliding movement between solids is the force of friction. Friction is an important feature of everyday life. We could not, for example, walk along a road unless our feet could grip on its surface. The brakes of a bicycle or car use friction between fixed brake blocks or disks and the moving wheel to slow it down. Of course, this effect is not always an advantage. Friction between moving parts on a vehicle is one of the main causes of wear.

The force of friction between two solids does not depend on their areas. This may seem surprising unless we recall that even highly polished surfaces are really like miniature mountain ranges. They only make contact with each other in the very few places where the peaks of one rest on the peaks of the other. The force of friction between two solids does depend upon how hard they are pressed together. In the case of an object resting on a horizontal surface the frictional force which opposes any attempt to make it slide is directly proportional to the weight of the object. In other words, the ratio of the frictional force to the load is constant. This ratio is known as the coefficient of sliding friction. It varies from one pair of substances to another.

The friction involved in rolling is less than the friction involved in sliding. Hence it is much easier to roll a log along the ground than to drag it. This explains why the wheel forms such a useful part of practically all land vehicles. For the same reason ball bearings and roller-bearings serve to make movement easier and to reduce wear in machinery.

The energy spent in overcoming the resistance of frictional forces is turned into heat. The primitive method of starting a fire by rubbing two sticks together provides a convincing example of this. The heat produced by the friction between a space capsule and the atmosphere as it returns to Earth has proved to be one of the astronaut's' major hazards.

To understand why one solid does not slide easily over another it is only necessary to look at the surface of a solid under a high powered microscope. Even an apparently smooth piece of metal is seen to have tiny irregular 'hills and valleys' all over its surface. When two such surfaces are rubbed together the 'peaks' of one dovetail with those of the other so it is not surprising that movement is hindered.

If the surfaces are lubricated by inserting a film of liquid between them, their irregularities are covered up by the film and they can slide fairly easily.

The most common lubricants are oils and grease, but graphite, a solid, is also important. Graphite is a form of carbon in which the atoms are arranged in layers. Neighboring layers can slide over each other with very little friction.

When a sled is pushed over ice, the pressure under the runners melts the ice so that the sled actually lubricates itself with a thin film of water as it slides along.

The patterned tread on a tire is primarily intended to improve its grip on wet and greasy roads. A smooth tire cannot make contact with the wet surface because of the layer of water trapped beneath it acting as a lubricant. But a patterned tread had a number of small areas of rubber with spaces between them. Each diamond of the tread makes contact with the road surface by squeezing the water into these spaces.

The frictional force opposing movement between the molecules of liquids or gases is known as viscosity.