The pressures operating on large structures, such as the bridge spanning the Severn [A], are measured by an electrical strain gauge [B]. This device uses the phenomenon (first noted by Lord Kelvin 1856) that if a wire is strained, its electrical resistance is changed. The principal was first employed practically in the United States in 1938 and now the strain gauge is the most common instrument used for analysis of stress. Gauges can consist of a grid of fine metal wire that is then bonded to a thin backing but, more commonly, a grid of wire filaments is obtained by printing onto the metal foil [C]. In either case, the gauge is cemented onto the structural surface and changes in its resistance are measured; the readings are then recorded automatically. 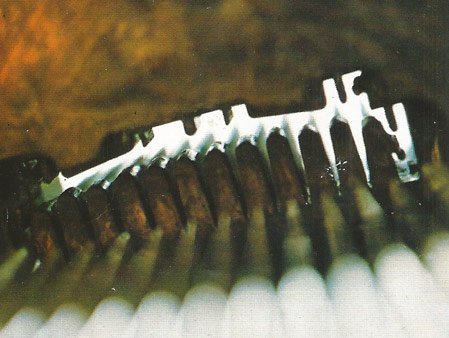 Metal forms of complicated shapes can be made by the process of extrusion. Cold metal is forced through a hole of the required shape and size and the great pressures exerted on the metal cause it to assume a "plastic" condition, so that it is able to "flow" smoothly through the extrusion die, as in this machine. 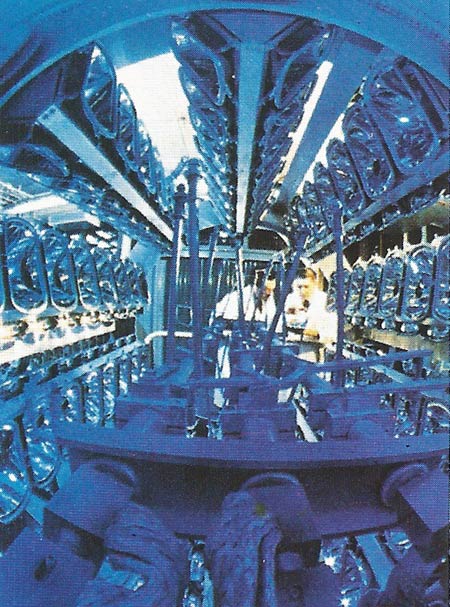 Vacuum deposition is widely used to form metal coatings on plastic objects. The object to be so treated is enclosed in a chamber, along with a wire filament carrying beads of the metal that is to be deposited. Then the chamber is pumped down to a very low pressure and an electric current is passed through the wire. The beads melt, vaporize and deposit a metal film on the objects. 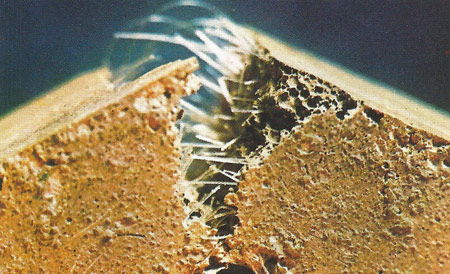 Testing materials to destruction is often necessary to discover their real strengths and their weaknesses. These tests are carried out in a machine that is capable of exerting both compressive and tensile (pulling) forces and it records automatically the applied pressure on the material at the very instant of its failure. Such tests are not confined to ductile metals (those that can be drawn out as wire), but also applied to brittle materials such as this fiberglass. 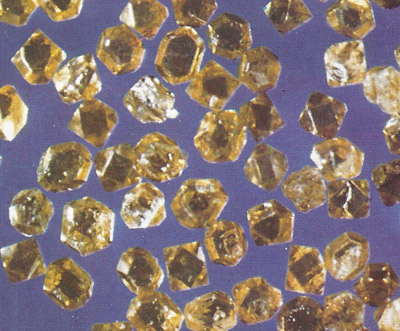 Pressure is the force acting normally on (at right angles to) a unit area of surface, or the ratio of force to area. The SI unit of pressure is the pascal (Pa = newton/meter2) but several other pressure units, including the atmosphere (101.325 kPa), the bar (100 kPa), and the millimeter of mercury (mmHg = 133.322 Pa), are in common use.

If a weight of 20 newtons (N) acts at right angles to on an area of 2 m2, the pressure it exerts is calculated as follows:

A good example of how the same force applied to different areas can have dramatically different effects is provided by the thumb tack (or drawing pin in the UK). Press down firmly on the large round head and the pin will sink easily into wood. Make the mistake of pressing down with the same force on the pointed end and the pin will sink easily into your finger! Similarly, flat shoes won't damage a wood floor whereas stilettos will.

Matter exists as either solid, liquid or gas, and all are compressible to various degrees. Perfect gases are compressible to almost any extent, following at low pressures Boyle's law (which states that the volume of a gas varies inversely with its pressure). But liquids are much less compressible and the changes in their volume brought about by pressure follow no simple law.

Solids are the least compressible. Their rigid structure, in which atoms have their mean separation distance fixed by very strong forces, is the most resistant to externally applies pressure. Their structure can be distorted or destroyed by sufficiently high pressures, but the way in which they actually behave is governed by their internal atomic or molecular arrangement.

The compressibility of a gas can be calculated by its equation of state, but that of a liquid or a solid has to be determined experimentally. For the liquid metal mercury at 0°C ( 32°F), for example, it has been shown that the volume changes by less than one-millionth part over a pressure range of 0–7,340 kg/cm2 (0–7,000 atmospheres).

Pressure applied to any substance can, under certain conditions, cause a change of state. Thus below a certain critical temperature pressure can turn a gas to liquid.

Extremely high pressures find many industrial applications. Hydraulically generated and transmitted pressures are employed for lifting extremely heavy loads. In the motor industry they are used to press completely shaped car body panels from flat metal sheet. The behavior of metals under compression is also the basis fro processes involving rolling and forging. Again, if sufficiently high pressures are brought to bear, metal enters what is called its "plastic" range. That means that the metal continues to yield (i.e., to extend its dimensions), even though the load applied remains constant. In the normal elastic range, the dimensions change in direct proportion to the applied load and return to normal when the load is removed. The plastic property is used in processes such as extrusion, but enormous pressures must be applied to achieve it.

At the other end of the pressure range is the vacuum, which can be of varying degree. To obtain a vacuum, gas atoms or molecules are removed from an enclosed vessel. The number of intermolecular collisions is correspondingly reduced and thus there is a reduction in the internal energy and pressure of the gas.

As with high pressures, high vacuum states also have many industrial uses. The process of vacuum deposition by evaporation allows solid objects to be thinly coated with metal. Here, the object to be coated is placed in an enclosed vessel that can maintain a high vacuum. When the coating metal is vaporized within that vessel, it forms a thin mirror-like film over the object.

There are other manufacturing processes in which the controlled deposition of impurities on substances or objects is performed by means of high vacuums. Sophisticated electronic circuitry is based upon this use of an ultra-high vacuum.

But technological processes are not the only applications of extremes of pressure. Given that all substances are compressible to some degree, consideration of the effects of increasing pressure on materials to be used in construction work is obviously important. Compression and tension tests of various building materials provide the necessary information and increase our knowledge of the extremes of stresses and strains sustainable by different substances.

The behavior of materials under the two extremes of pressure is well demonstrated in the varying conditions of space. Extremely high vacuum conditions exist in interstellar space, with probably only a few atoms per cm3. Separate chemical radicals have been found in interplanetary space.

Artificial diamonds are produced when graphite is subjected to very high pressures and temperatures. Most of the stones are inferior to those that have been produced by nature.