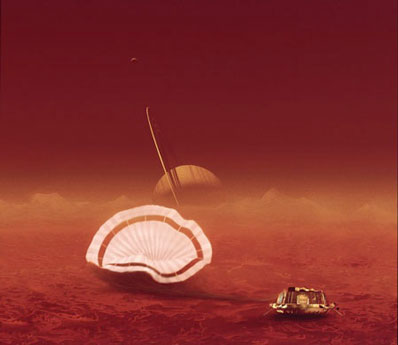 Together with Mars, Europa, and Callisto, Titan is considered one of the most promising locations in the solar system to look for signs of significant prebiotic evolution. It provides perhaps the closest analogue to the environment on Earth immediately before the appearance of the first organisms, and so offers a natural laboratory in which scientists can observe some of the crucial chemical steps leading to life. However, there are significant differences between the ancient terrestrial and current Titan environments. Apart from the obvious dramatic difference in temperature (Titan is at a chilly -180°C), current prevailing opinion holds that Earth's early atmosphere was predominantly nitrogen and carbon dioxide, whereas Titan's is dominated by nitrogen with some methane and smaller amounts of other substances. It is thought that Titan's methane, through on-going photochemistry, is converted to ethane, acetylene, ethylene, and (when combined with nitrogen) hydrogen cyanide. The last is an especially important molecule, since it is a building block of amino acids. But Titan's atmosphere in the words of University of Arizona's Jonathan Lunine is "neutral for oxidation and reduction reactions and does not allow an easy and direct formation of long chains of organic molecules. Some particular circumstances may be required to create them." Although there isn't much carbon dioxide on Titan, Lunine has pointed out, if we see that complex organic molecules are created on Titan, it would be a very important lesson about the early Earth and the environment in which life originated.

Some laboratory work has been done to simulate what may be happening on Titan. In 1988, Carl Sagan and colleagues at Cornell University carried out experiments in which they simulated the chemistry of Titan's atmosphere. Starting with a mixture of nitrogen, methane, hydrogen, and helium at the appropriate pressures and concentrations, they subjected this to a high voltage to mimic the effect of an aurora. Various organic materials were produced, including hydrocarbon chains up to 7 carbon atoms long, nitriles, and a brownish-orange solid with optical properties similar to those of Titan's haze established by Voyager and ground-based observations. Titan's low temperature and consequent lack of liquid water may have inhibited more complex organic chemistry, though it is not clear to what extent volcanism and major impacts may have furnished locally more favorable conditions for prebiotic development. There is the possibility of cryovolcanism — volcanism in which the fluid is not molten rock, but liquid water that possibly includes ammonia and other antifreezes. This would be important because it would allow for the liquid water to be briefly present at times and to modify the organics locally in some way.

Some answers to the mysteries of Titan will hopefully come from the Cassini mission and, in particular, from the Huygens Probe when in descends through the atmosphere of Titan in 2004. Whatever molecules are generated in the atmosphere will presumably, over time, be deposited on the moon's surface. The atmospheric pressure at Titan's surface is 50% higher than on Earth, comparable with the pressure at the bottom of a 3-m-deep swimming pool. Titan's thick atmosphere protects the surface and organics from harmful cosmic rays and ultraviolet radiation. Particularly exciting would be if Huygen's found any variations in the apparent organic composition that are correlated with impact carters or sites of volcanism. In this case, such sites would earmarked as potential places to visit in the future. Could Titan host primitive life? Some scientists have begun increasingly to speculate about this. One possibility is that microorganisms could exist in Titan's deep interior where liquid water may be available all the time. Another possibility is active water volcanism which would lead to transient water flows and the outside chance of surface biology. Yet again, Titan must be heated occasionally by large impacts. In the early 1990s, Carl Sagan and W. Reid Thompson of Cornell University suggested that impacts on the surface of Titan would melt the icy crust and produce liquid water.1 Finally, it has been suggested that life on Titan might have a fundamentally different basis to that on Earth. One possibility is that, instead of water, hydrocarbons, which are naturally liquid on Titan, might act as a solvent for life directly. In many ways, hydrocarbon solvents are better than water for managing complex organic chemical reactivity.2, 3