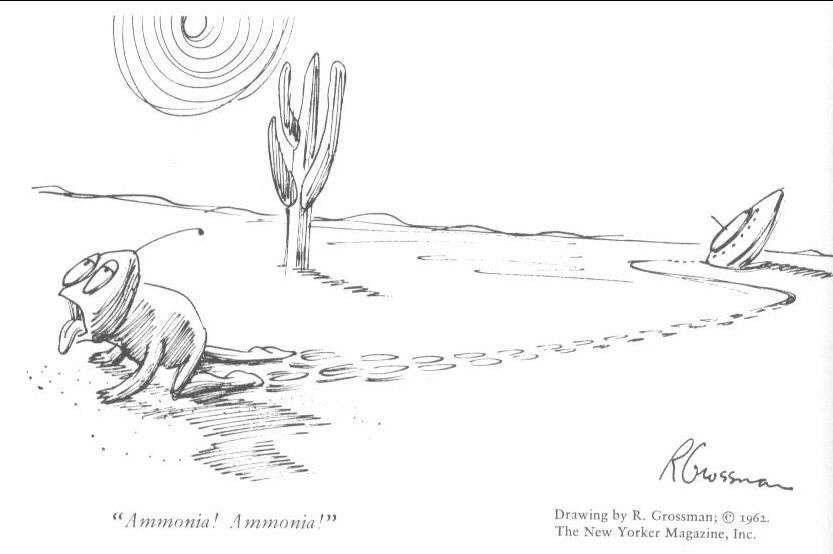 This entry is based, in part, on material from the section "Alternatives to Water" in the book Xenology: An Introduction to the Scientific Study of Extraterrestrial Life, Intelligence, and Civilization by Robert A. Freitas, Jr.

In 1954, J. B. S. Haldane, speaking at the Symposium on the Origin of Life, suggested that an alternative biochemistry could be conceived in which water was replaced as a solvent by liquid ammonia.1 Part of his reasoning was based on the observation that water has a number of ammonia analogues. For example, the ammonia analogue of methanol, CH3OH, is methylamine, CH3NH2. Haldane theorized that it might be possible to build up the ammonia-based counterparts of complex substances, such as proteins and nucleic acids, and then make use of the fact that an entire class of organic compounds, the peptides, could exist without change in the ammonia system. The amide molecules, which substitute for the normal amino acids, could then undergo condensation to form polypeptides which would be almost identical in form to those found in terrestrial life-forms. This hypothesis, which was developed further by the British astronomer V. Axel Firsoff,2, 3 is of particular interest when considering the possibility of biological evolution on ammonia-rich worlds such as gas giants and their moons (see life on Jupiter).