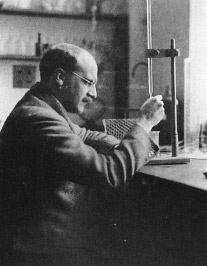 J. B. S. Haldane was a British-born geneticist (later a citizen of India) whose work, with that of Ronald Aylmer Fisher (1890–1962) and Sewall Wright (1889–1988), provided a basis for the mathematical study of genetics.

In a 1929 essay,1 Haldane speculated about the chemical origin of life on Earth. He proposed that carbon dioxide, together with ammonia and water vapor, made up the bulk of the Earth's primitive atmosphere (see Earth, early conditions). His reasoning was that coal came from plants which, in turn, obtain their carbon from carbon dioxide in the air; therefore, before life came into being, all the carbon now in coal must have existed as carbon dioxide. Much of the nitrogen now in the atmosphere, he argued, would have been combined as nitride salts in the Earth's crust. Water acting on these nitrides would have released ammonia, giving rise to a reducing atmosphere. Before there were plants to give off oxygen, Haldane pointed out, this gas would have been absent from the atmosphere. Therefore, there would have been no protective layer of ozone to block ultraviolet radiation from the Sun. Citing experiments carried out two years earlier by E. C. C. Baly and his colleagues at Liverpool, Haldane concluded that the effect of this energetic radiation on the primitive carbon dioxide-ammonia-water vapor atmosphere would be to give rise to simple organic chemicals, including, probably, amino acids. These organic compounds would accumulate in the Earth's oceans until they "reached the consistency of hot, dilute soup." Further chemical synthesis would take place giving rise, ultimately, to the first primitive organisms which would then feed on the rich, organic nutrients around them. See also Oparin-Haldane theory.

Haldane also wrote on the possibility of silicon-based life. His semifictional essay "The Last Judgement" in Possible Worlds2 (1927) provided some of the basis for Stapledon's extrapolation of the future of mankind in Last and First Men, while "On Being the Right Size" (also from Possible Worlds) discusses some of the factors which may constrain the size and morphology of extraterrestrials.

J. B. S. Haldane's father, John Scott Haldane (1860–1936) was a physiologist best known for his researches into industrial (especially mining) diseases caused by poor ventilation. He also contributed to a technique for dealing with the "bends" (see aeroembolism).

"I have the doubt that in reality the future will be vastly more surprising than anything I can imagine. Now my own suspicion is that the universe is not only queerer than we suppose, but queerer than we can suppose ... I suspect that there are more things in heaven and earth than are dreamed of, or can be dreamed of, in any philosophy."