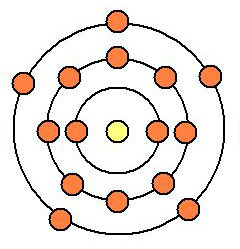 The electron configuration of a phosphorus atom.

Phosphorus-based life is hypothetical extraterrestrial life based on the element phosphorus, instead of carbon. It has been suggested as a remote possibility. However, although phosphorus can be conceived of as a potential biochemical building block, with phosphine (PH3) as a compatible solvent, a major stumbling is the poor variety of phosphorus hydrides. At best, it seems that phosphorus might be able to form chains with other elements such as carbon, silicon, or nitrogen.

Phosphorus is critical to terrestrial life: phosphorus and phosphates are key parts of the double-helix "backbone" of DNA and the energy transport molecule ATP. However, the abundance of phosphorus in animals is about 17,000 greater than that in the Sun (and, therefore, the solar nebula), and two orders of magnitude greater than other major biogenic elements, such as carbon, nitrogen, and oxygen. Put another way, life-as-we-know-it needs a lot of phosphorus compared to the solar abundance (and, by extension, the cosmic abundance), and the lithosphere of Earth has managed to concentrate the phosphorus to a much greater extent than other biogenic elements. This suggests a possible bottleneck in biotic chemistry.

Phosphorus is manufactured only in moderately massive stars (greater than about 15 solar masses, by neon and carbon fusion), and its presence in interstellar molecule species appears to be quite sensitive to dust grain mantle chemistry and fragility. It is conceivable then that planetary systems could exist that have low phosphorus contents and are then perhaps less suitable for Earth-type biochemistry. It is also conceivable that that processes that have resulted in the Earth concentrating phosphorus to a high degree are not ubiquitous in terrestrial worlds. Furthermore, much of the phosphorus in the terrestrial lithosphere is in the form of phosphates (particularly the apatite minerals), which are not particularly soluble and require further processing in order to be available to organisms. Thus, the abundance of phosphorus in solution (or easily soluble form) is significantly lower than is suggested by the pure value in the lithosphere. In addition, if much of the initial prebiotic chemistry of a planet takes place in interstellar space and the circumstellar environment of a protostar, then the animal/solar concentration may be a better indicator of the degree to which phosphorus must be harvested in order for the eventual success of entire biospheres.