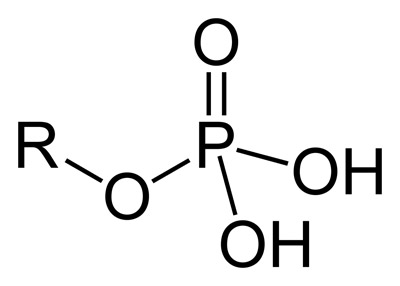 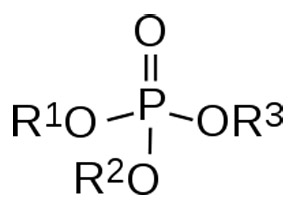 A phosphate is a derivative of phosphoric acid: either a phosphate ester or salt containing any of a variety of phosphate ions (Fig 1). Like silicates, these are numerous and complex, the simplest being orthophosphate, PO43-, consisting of a phosphorus atom and four oxygen atoms. Among other things, it is used in the construction of nucleic acids.

Of many phosphate minerals, the most important is apatite. This is treated with sulfuric acid or phosphoric acid to give calcium dehydrogenations (Ca[H2PO4]2), known as superphosphate – the major phosphate fertilizer. The alkaline trisodium phosphate (TSP), Na3PO4, is used as a cleansing agent and water softener. Phosphates are also used in making glass and soap and detergents.

Phosphates are an essential part of the diet and are present in many foods, including cereals, dairy products, eggs, and meat. About 85% of the body's phosphorus is combined with calcium to form the structure of bone and teeth. The remainder is deposited in small amounts in most of the body's tissues and plays a part in maintaining the acid-alkaline balance of the blood, urine, saliva, and other body fluids. ATP (adenosine triphosphate) is a phosphate compound which stores energy for chemical reactions in cells.

Hypophosphatemia (an abnormally low level of phosphates in the blood) may occur in some forms of kidney disease, hyperparathyroidism, long-term treatment with diuretic drugs, malabsorption, or prolonged starvation. It causes bone pain, weakness, seizures, and, in severe causes, coma and death.

Phosphates may be taken by mouth in the form of drug preparations or milk to treat hypophosphatemia. Phosphates are also used to treat hypoglycemia. Diarrhea is a possible side-effect of phosphate drugs.

An organophosphate is an organic chemical in which the molecules contain at least one atom of carbon and one of phosphorus (Fig 2). The best-known organophosphates are some insecticides, certain nerve gases, essential nucleic acids and nucleotide enzymes. Organic derivatives of the phosphorus acids are important in the manufacture of fertilizers. These are highly toxic.

Phosphorylation is a biochemical reaction in which a phosphate group is introduced into a molecule. Controlled by the enzyme phosphorylase, it is the initial state in many natural biochemical processes, such as the conversion adenosine diphosphate (ADP) to energy-rich adenosine triphosphate (ATP). Phosphorylation is also an important reaction in the activation or deactivation of enzymes, often under hormone control.