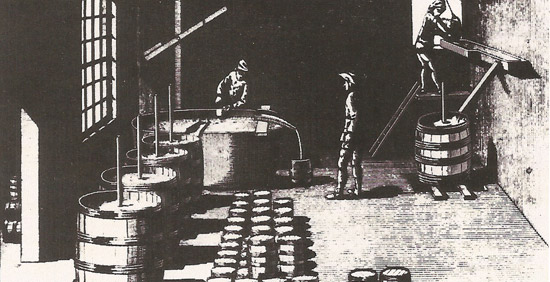 Fig 1. Early soap making was done in open pans where lye (crude sodium hydroxide) made from plant ash and limestone were heated with animal fats. The soap formed a crust on cooling and could be skimmed off. 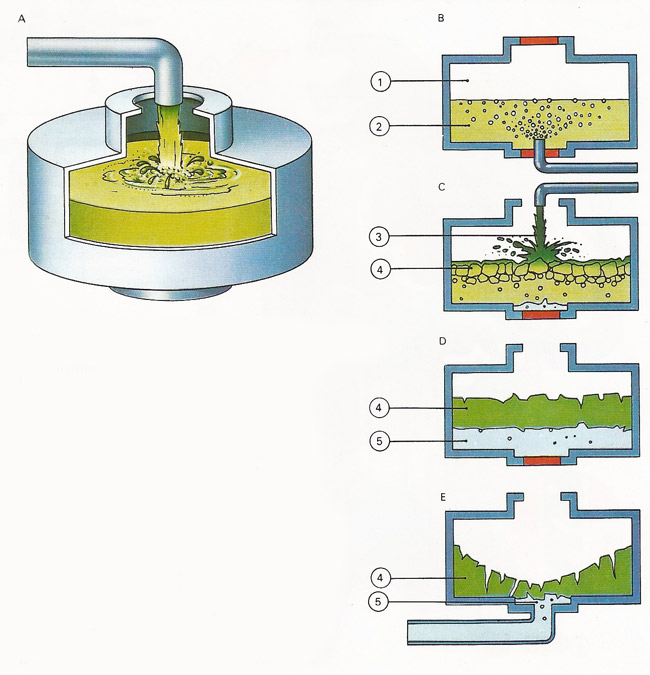 Fig 2. Modern soap-making methods (A) follow ancient principles. Fat and alkali are saponified producing soap and glycerol. Today's equipment allows the process to be completed in 15 minutes instead of several days. (B) Fats and oils (2) are reacted with water under high temperature and pressure (1). (C) Alkali (3) is added to the resulting mixture of fatty acids to produce soap (4). (D) The soap still contains glycerol (5), which is washed out (E) using brine, and the salt solution is separated from the soap in a centrifugal extractor, which works like a spin dryer. Any fatty acid then left is neutralized with alkali and salt and again separated in a centrifuge. The molten soap is then poured into mixing machines which blend in other ingredients such as perfumes, softeners, germicides and color. It is then ready for shaping into hard soap, toilet soap, flakes, or powder.

Fig 3. Detergents are needed for washing because water is not a good wetter. Detergents solve this problem. One end is water-attracted (hydrophilic); the other dissolves in oils (hydrophobic, or water repellent). Sodium dodecylbenzenesulphonate [1] is a synthetic detergent with a hydrophilic head [2] and hydrophobic tail. The detergent [3] is added to water and the dirty material [4]. The hydrophobic tails stick into the grease [5], while the hydrophilic heads repel each other, forcing dirt and grease up into the water [6]. Dirt particles [7] do not return to the cleaned material because both material and dirt now have the same electric charge and repel each other. 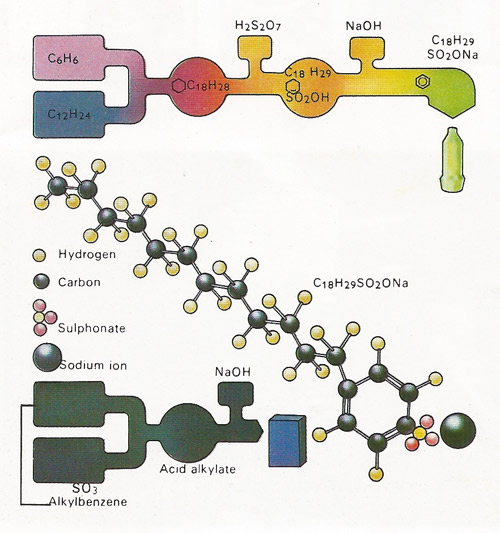 Fig 4. Synthetic detergents are a mixture of various ingredients, the chief of which is the cleansing agent, or surfactant. A common surfactant has the chemical name sodium dodecylbenzenesulphonate. It is made from petroleum products and has the molecular structure shown. Much dirt is held on clothing by greasy substances. The long tail (the dodecyl part) of the surfactant molecule dissolves in the grease, while the ionic head (the sulphonate part) dissolves in water. The two types of detergent manufacture shown use common hydrocarbon starting materials.

Soaps and detergents are substances which, when dissolved in water, are cleansing agents. Soap has been known since about 600 BC; it was used as a medicine until its use for washing was discovered in the 2nd century AD. Until about 1500 it was made by boiling animal fat with wood ashes (which contain the potassium carbonate). Then caustic soda (sodium hydroxide), a more effective alkali, was used; vegetable fats and oils were also introduced.

Saponification, the chemical reaction in soap-making, is an alkaline hydrolysis of the fat (an ester) to yield glycerol and the sodium salt of a long-chain carboxylic acid. The potassium salt is used for soft soap. In the modern process, the hydrolysis is effected by superheated water with a zinc catalyst, and the free acid produced is then neutralized. Synthetic detergents, introduced in World War I, generally consist of the sodium salts of various long-chain sulfonic acids, derived from oils and petroleum products.

The principle of soaps and detergents is the same: the hydrophobic long-chain hydrocarbon part of the molecule attaches itself to the grease and dirt particles, and the hydrophilic acid group makes the particles soluble in water, so that by agitation they are loosed from the fabric or other surface and dispersed (see Figure 3). Detergents do not (unlike soaps) form scum in hard water. Their persistence in rivers, however, causes pollution problems, and biodegradable detergents have been developed. Household detergents may contain several additives: bleaches, brighteners, and enzymes to digest protein stains (egg, blood, etc.).

Man has been using various kinds of cleaning agents for thousands of years, because water itself does not readily get rid of dirt and grease, as our ancestors discovered early on. Water is not a good "wetter" because of its high surface tension, which causes it to run off a greasy area or to stay there without penetrating it. Only when some cleansing agent that lowers surface tension is added, can water penetrate to remove grease.

The Babylonians added alkaline plant ash (potash) to water. Other primitive cleansers were fuller's earth (a type of fine clay which easily absorbs impurities from oil and fat), soap berries (tree fruits containing a soapy substance called saponin), and the sap of the soapwart plant. Soap itself was probably first made in the Nile valley in about 600 BC. Phoenician seamen carried the knowledge to the Mediterranean coasts. In the 1st century AD the best soap was made from goat's fat and beechwood ashes. Animal fat and wood ash remained the raw material for centuries. Nowadays, manufacturing materials for keeping clean is a major industry and soaps and detergents are used in most homes.

Soap-making was a small domestic industry until the end of the eighteenth century when a number of changes took place. In 1787 it was discovered that the alkali caustic soda could be made from common salt – a plentiful raw material – so manufactures were no longer dependant on plant ashes (Fig 1). Vegetable oils such as olive oil had been used in soap-making by the Spaniards as early as AD 700 and now others became more easily available from countries outside Europe. Coconut oil, palm oil, sesame oil and soya-bean oil were imported from Africa, South-East Asia and China and by 1900 were replacing animal fats, which were in short supply. Social changes in the nineteenth century had led to an increased demand for soap and production in Britain rose from 90,000 tonnes in 1853 to 300,000 tonnes by 1900.

The treatment of oil or fat with alkali (saponification) is the first stage in the manufacture of all types of 'washing' soap. This reaction produces sodium salts of stearic, palmitic and oleic acids. After saponification the soap contains about 30% water – for making the more dense toilet soaps this has to be reduced to about 12%. Then various refinements such as perfumes, preservatives, whiteners, or coloring materials and sometimes, germicides (for medicated soaps) are added and thoroughly mixed. The molten soap is then cooled and cut to size – abrasives are added if scouring soap is wanted (Fig 2).

Soap flakes are produced by spreading the molten soap over water-cooled drums and producing ribbons of soap which are rolled progressively thinner and then broken into flakes. Soap powders normally contain silicates and phosphates which are added to the liquid soap – the resultant slush is superheated under pressure and sprayed into the top of the tower. As the droplets fall they solidify to give the familiar soap powder.

Not all soaps are soda based. Some made with caustic potash are used in liquid soaps and shaving cream and other types are used in textile finishing, as lubricants, in the cosmetics and pharmaceutical industry, in polishes and in emulsion paints.

However, soaps have a number of disadvantages, as cleaning agents. They do not work in even slightly acid water, which is why various alkaline substances - carbonates, phosphates and silicates – are added to household soaps. And, most important, they do not work well in hard water. The soap reacts with calcium and magnesium salts to form the familiar insoluble "scum" which leaves rings on bathtubs or a whitish film on glassware. Moreover, the availability of the raw materials (oils and fat) from making soap varies unpredictably. For these reasons manufacturers began looking, in the late 1940s, for a new type of synthetic detergent that would overcome these problems.

The first synthetic detergents to be made on a large scale were based on products of the distillation of crude oil – at that time a cheap and readily available raw material. By the 1950's detergents based on the synthetic chemical alkylbenzenesuphonic acid (ABS) had captured more than 50% of the fabric washing market.

But early ABS detergents had an important defect. They contained branched chain molecules that made them biologically "hard", or non-degradable, which meant that they were not easily broken down by the bacteria in sewage treatment plants. These detergents were replaced by degradable detergents (linear alkyl sulfonates, LAS).