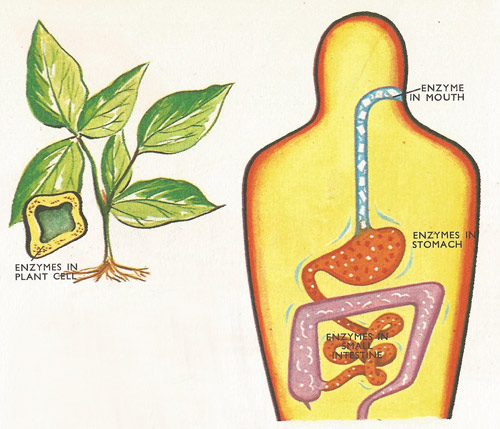 Fig 1. All the enzymes that help to digest the foods in the gut, by breaking down the large molecules into smaller ones, do so by the chemical process called hydrolysis. Many of the reactions taking place in plant cells are also hydrolyses. The enzymes add the elements of water to the neighboring parts of molecules which are 'tied' together by chemical bonds. 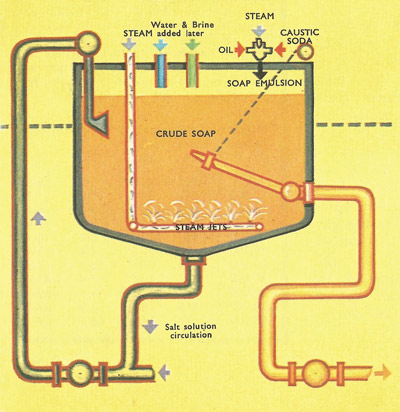 Fig 2. The modern method of making soap is divided into three stages, the first of which is saponification. The mixture of fat and concentrated alkali solution is boiled by passing steam through it in the pan.

Fig 9. A narrow ribbon of light from the sodium lamp in the right is passed through the standard sized tube containing the solution. If the solution is 'optically active', as is the case with a solution of sucrose, the ribbon of light is rotated. The observer finds the extent of the rotation by turning the left hand end of the apparatus until no light is visible through it. 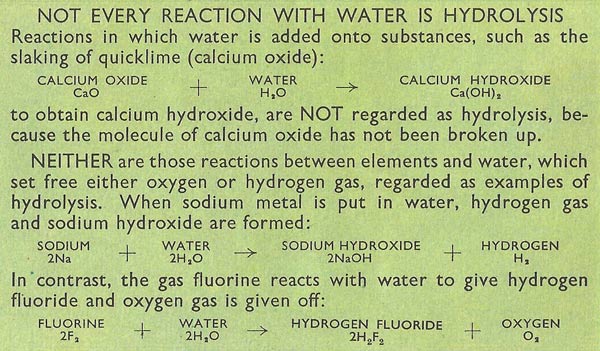 Fig 10. Not every reaction with water is hydrolysis.

The reaction known as hydrolysis is important in chemistry, but it is even more important to living processes such as digestion in animals, and to growth in plants and animals (Fig 1). Soap is manufactured by hydrolysing fats and oils (Figure 2). The term hydrolysis is of Greek origin, and means 'water-splitting'. This is the clue to its meaning in chemistry. Water (H2O) or compounds containing the ingredients of water are split into hydrogen ions and hydroxyl groups (OH) which then combine in new arrangements.

Although water is necessary for hydrolysis, hydrolysis does not take place in all reactions involving water. It is essential that the substance with which the water reacts should be broken up. At the same time the molecule of water is split up into a hydrogen ion and a hydroxyl group (a reactive group comprising one hydrogen and one oxygen atom), each of which generally combines with one of the fragments obtained by splitting the other substance.

Thus the reaction between phosphorus trichloride (a colorless liquid) and water is classed as hydrolysis because both molecules are split up – phosphorous acid and hydrochloric acid (both in solution) are formed (Fig 3).

When acid is neutralized by a base a salt is formed and water is set free. Provided that both the acid and the base are strong, a neutral salt is formed. Such is the case when hydrochloric acid reacts with sodium hydroxide to form sodium chloride and water (Fig 4).

However, if either the acid or the base is weak, the salt formed will tend to behave as a base or an acid towards litmus, turning litmus blue or red as the case may be. Thus if acetic acid (a weak acid) is added to sodium hydroxide (a strong base) in the correct proportions, sodium acetate and water are formed. The reaction is, however, reversible so that a solution of sodium acetate in water contains free acetic acid and sodium hydroxide (Fig 4).

The solution turns red litmus blue (i.e. is basic) because sodium hydroxide is a strong base whereas acetic acid is a weak acid. The reaction (from left to right) is, therefore, another example of hydrolysis since both the water and sodium acetate molecules are broken up by it.

In a similar way ammonium chloride, the salt formed from a strong acid (hydrochloric) and a weak base (ammonia) is slightly hydrolysed in solution (Figure 5).

In this instance the solution turns blue litmus red (i.e. is acidic). The salt of a weak acid and a weak base (e.g. ammonium acetate) will also be hydrolysed in solution, and the solution will either be acidic or basic depending upon the relative strength of the acid and base.

The formation of esters in organic chemistry is, in many ways, similar to the formation of salts in inorganic chemistry. Esters are, in general, pleasant fruity-smelling liquids which do not normally mix with water. Many are used for flavor purposes - amyl acetate gives pears their characteristic taste while pineapples contain ethyl butyrate. Amyl acetate is now also used as a solvent for cellulose and in the manufacture of cellulose paints.

Esters may be prepared by heating together carboxylic acids (such as acetic acid) and alcohols. As in the preparation of salts from an acid and a base, water is also formed when esters are made by such a reaction,

Since alcohols do not break up into ions in solution whereas the true bases (e.g. sodium hydroxide) of inorganic chemistry do, the formation of esters is rather a slow process. As soon as some of the ester has been formed, it begins to split up again into alcohol and acid so that the reaction does not go to completion. The process, often referred to as esterification, may be speeded up by the addition of hydrogen chloride which acts as a catalyst - it speeds up the reaction but does not undergo any permanent chemical change as a result of it.

Since the above reaction does not go to completion it is not surprising to learn that it is reversible, and the reverse process (the formation of acid and alcohol) is yet another instance of hydrolysis. The hydrolysis of esters is commonly known as saponification, since one of the most important commercial application of this process of hydrolysis is in the manufacture of soap. Soaps are sodium salts of the 'fatty' acids, and these are obtained by hydrolysis of animal fats and vegetable oils which are esters of the fatty acids with glycerine (Fig 8). Sodium hydroxide (caustic soda) is used as a catalyst in this reaction.

Some of the more complicated carbohydrates – starches and sugars – may be broken down into simple molecules by hydrolysis. In common with the hydrolysis of other organic substances, these reactions proceed much more readily with the aid of catalysts. A solution of cane sugar (sucrose) can be broken down into equal quantities of the simple sugars – glucose (grape sugar) and fructose (fruit sugar) – with the aid of dilute acid or the enzyme, invertase. The easiest way of showing that the change, known as inversion, has taken place is to put the original and final solutions in turn into a special piece of apparatus called a polarimeter (Fig 9). The solution of sucrose causes the light passing through the polarimeter to be turned in a clockwise direction, while after inversion the solution of glucose and fructose turns the light anticlockwise.

There are, in the mouth, enzymes which are suitable for bringing about the hydrolysis of ordinary, natural starch, to give the sugar, maltose. If a grain of starch is placed on the tongue, it is not at first sweet. However, once the enzymes have had a chance to act on the starch, the substance gradually becomes more sweet as maltose is formed. In this way an idea can be obtained of the time taken for this type of reaction (the hydrolysis of organic materials) to take place.

In a similar way to the breaking down of sugars, other components of food-stuffs are hydrolysed with the aid of enzymes as one stage of the digestive process in the body.


Summary of the chemistry of hydrolysis

Hydrolysis is a double decomposition reaction effected by water, according to the general equation

If XY is a salt of a weak acid or a weak base, the hydrolysis is reversible, and affects the pH of the solution (see buffer). Reactive organic compounds such as acid chlorides and acid anhydrides are rapidly hydrolyzed by water alone, but others require acids, bases, or enzymes as catalysts (as in digestion).

Industrial hydrolysis processes include the alkaline saponification of oils and fats to glycerol and soap, as seen above, and the acid hydrolysis of starch to glucose.

Hydrolysis is the reverse of a condensation reaction. A water molecule is added to the point in a polymer where two subunits are joined, causing the polymer to split apart at that point.