The position of an element in the periodic table is a good guide to the type of hydride it will form. The alkali and alkaline earth metals (on the left of the table above) form ionic hydrides in which hydrogen is the acid radical. The non-metals also gives rise to ionic hydrides, but in these hydrogen is present as a positive ion which can be replaced by metallic ions. 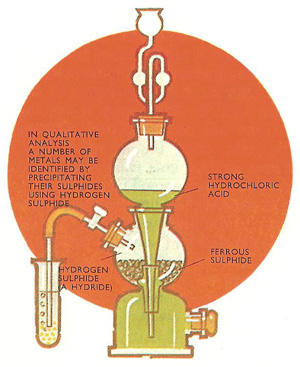 A hydride is a binary compound of hydrogen with another, more electropositive element or group (one that loses electrons and forms positive ions). Hydride ions and hydride ionic compounds react instantly and sometimes violently with water.

There are several different types of hydrides.

Salt-like. These are the hydrides of the most electropositive elements (e.g. sodium) and contain ions. They are crystalline solids and react violently with water to give hydrogen.

Covalent. These are formed by most of the non-metals and transition metals, in groups IB–VIIA of the periodic table. They are mainly volatile, reactive compounds, though those of groups IB and IIB, and aluminum, are nonvolatile polymers. Covalent hydrides include such diverse compounds as methane and iron carbonyl hydride, H2Fe(CO)4. In many compounds the hydrogen atoms act as a bridges. Where there are more than one hydride sites there is often hydrogen exchange between the sites.

Complexes. These derivatives contain complex anions which may be considered as derived from coordination of an H- ion to a metal or non-metal. Examples are the BH4- and ReH92- ions.

Transition metal hydrides. These are formed by hydrogen uptake by transition elements (groups IIIB–VIII). The phases are often non-stoichiometric and electrically conducting. They resemble alloys and some have interstitial structures.

However, compounds containing hydrogen do not necessarily yield positively charged hydrogen ions. If an electric current is passed through molten lithium hydride (LiH), the lithium ions travel toward the cathode while hydrogen gas can be collected above the anode. In this instance the hydrogen ions are negatively charged. This unusual property is characteristic of the compounds which hydrogen forms with the alkali and alkaline earth metals (lithium, sodium, potassium, calcium, etc.).

Hydrogen combines with many elements to form compounds called hydrides. The compounds of hydrogen with the more common non-metallic element such as sulfur, chlorine, and iodine are usually regarded as hydrides because most of them yield acid solutions when they are dissolved in water. They give rise to series of metallic salts such as the sulfides and iodides. However, the term hydride (which should not be confused with hydrates, meaning compounds containing chemically combined water) can be applied to any compound containing hydrogen and one other element.

The hydrides can be divided into several groups according to their properties. These groups correspond quite closely to the position of the other element in the periodic table. The alkali and alkaline earth metals and the halogens (non-metals) are at opposite ends of the horizontal rows or periods in the table, and the hydrides which they form behave in quite different ways. But all these hydrides are ionic – the non-metallic ones give positively charged hydrogen ions, while the metallic ones yield negatively charged hydride ions. But between these extremes there are many more hydrides both of metals and non-metals. The parts of these molecules are held together by much stronger forces than the in the ionic hydrides and no ions are formed.

All the hydrides of the alkali and alkaline earth metals are strong reducing agents. They react with water, some of them violently. Hydrogen gas is liberated and the hydroxide of the metal is formed. The reaction between water and calcium hydride is, by comparison, quite mild. For this reason calcium hydride is used as a convenient source of portable hydrogen, just as calcium carbide is used for making acetylene. Both lithium hydride and lithium aluminum hydride (liAlH4) are very useful for producing nascent hydrogen when preparing organic substances.

The hydrides of this group are fairly stable, colorless, crystalline compounds which resemble, in some ways, the chlorides and iodides of the same metals. They are usually prepared by passing hydrogen under pressure over the heated metal.

Although it is doubtful whether true chemical compounds are formed between hydrogen and some metals, it is certainly true that hydrogen gas is absorbed by many metals when they are heated in the gas. The power of the metal palladium to absorb hydrogen is outstanding. Powdered palladium which has been kept in an atmosphere of hydrogen at 100°C for three hours, and then left to cool in the gas for 90 minutes absorbs as much as 650 times its own volume of the gas.

When these hydrides are dissolved in water they form acid solutions and positively charged hydrogen ions are produced. These hydrides give rise to well-defined series of salts – chloride, iodides, and sulfides.

The hydrides of oxygen (water and hydrogen peroxide) do not appear to resemble any of the other hydrides very closely. Water occupies an almost unique position – many of its unusual properties are due to hydrogen bonding between molecules.

The hydrides of carbon (the hydrocarbons) are probably the most important hydrides of this group. This almost limitless range of compounds is present in crude oil, or is produced at various stages in refining. The hydrocarbons are valuable as fuels and, even more important, as the raw materials used in the manufacture of a vast range of substances including plastics and artificial fibers.

Both silicon and boron resemble carbon to some extent, but the ability to form chain hydrides is rather limited. The chains may contain up to six atoms per molecule. Compounds of the aromatic type do not exist. The hydrides of boron and silicon are by no means so stable as those of carbon.

The hydrides of two other non-metals – nitrogen and phosphorus – are also important and have certain properties in common. Both ammonia (NH3) and phosphine (PH3) are alkaline and form halides, though in these respects phosphine is much weaker. Ammonia actually gives rise to an ion – the ammonium ion – which behaves in a similar way to the ions of alkali metals.