The geometry of the hydrogen sulfide molecule. 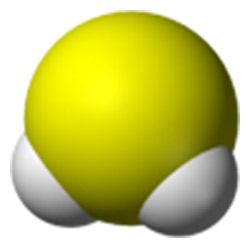 Hydrogen sulfide (H2S) is a colorless, highly toxic, flammable gas, well-known for its odor of rotten eggs. It is produced naturally by the hydrolysis of sulfide minerals and the bacterial breakdown of sulfur-containing organic compounds (as in the case of bad eggs and also of flatulence). It is also found in crude oil.

Hydrogen sulfide burns in air with a pale blue flame, forming sulfur dioxide and water. It is soluble in water and the solution is slightly acidic. Hydrogen sulfide neutralizes alkalis to form salts known as sulfides. Double decomposition takes place if the gas is bubbled into solutions of salts of certain metals. Many sulfides are insoluble and have distinctive colors. As hydrogen sulfide is easily oxidized it acts as a reducing agent in a number of reactions.

Hydrogen sulfide (H2S) is the closest chemical analogue of water (H2O), since sulfur and oxygen occur in the same group of the periodic table.

Hydrogen sulfide may be conveniently prepared in the laboratory by the action of of cold dilute hydrochloric acid on iron (II) chloride (FeS + 2HCl → FeCl2 + H2S). As the gas is soluble in cold water it may be collected by upward displacement of air or over warm water. Traditionally, Kipp's apparatus was used in laboratories for preparing, storing, and supplying hydrogen sulfide in small amounts.

Hydrogen sulfide is the most prevalent chemical dissolved in the water issuing from undersea hydrothermal vents. It is produced when seawater reacts with sulfate in the volcanic rock below the ocean floor. The oxidation of hydrogen sulfide to sulfate furnishes vent bacteria with the energy needed to produce organic matter in the absence of light for photosynthesis. Hydrogen sulfide is also contained in the water that comes out of hot springs in places such as Yellowstone National Park. Again, in such places it is a source of energy for microbial extremophiles and also the source of the familiar sulfurous smell associated with geothermally active regions. It has been suggested that hydrothermally active locations on other worlds, such as Mars and Europa, might serve as incubators or sustainers of simple extraterrestrial life forms.