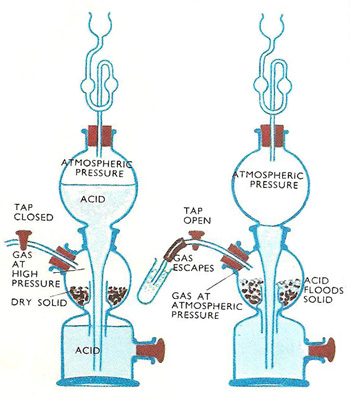 Kipp's apparatus is an elaborate piece of laboratory glassware used, until quite recently, for preparing and storing small volumes of certain gases, notably hydrogen sulfide. It is named after its inventor, the Dutch pharmacist Petrus Johannes Kipp (1808–1864). Kipp's apparatus, also known as a Kipp generator, has now been superceded for the production of hydrogen sulfide by the use of thioacetamide, an organic solid that converts to hydrogen sulfide in water.

In any chemical laboratory where analysis is carried out, there needs to be a supply of hydrogen sulfide gas which can be turned on and off at will. Usually when a gas is made in the laboratory, the apparatus has to be set up each time the gas is needed. Furthermore there is no way of switching the supply on and off. For hydrogen sulfide, prior to the modern use of thioacetamide, Kipp's apparatus overcame this problem. The same apparatus can also be used for supplying carbon dioxide or hydrogen on tap. Although a regular supply of other gases may also be needed, these are the only three common gases for which the Kipp's apparatus can be used. This is because to produce other gases heating is required. This is out of the question in the Kipp's apparatus because it would shatter on heating. The gas flow is controlled by making gas only when a cold liquid is in contact with lumps of solid. Hydrogen sulfide, carbon dioxide, and hydrogen are all made in this way. When the liquid is drained away from the solid, the supply stops. No heating is needed to make them. They are made by the action of cold acids on pieces of solid. Broken sticks of ferrous sulfide are used for making hydrogen sulfide, marble chippings for carbon dioxide, and zinc granules for hydrogen. The Kipp's apparatus is made of thick glassware and usually stands about 1 ft 6 in (about 0.5 m) high. Other sizes are also made. Basically it consists of three glass bulbs connected one above another. The solid needed to make the gas is placed in the central bulb by lifting off the top bulb and the glass tube fitted to it. A ground glass fitting connects this top section to the lower part. A glass fitting stops the solid from falling down into the bottom bulb. The gas exit tube leaves from the central bulb. On it is a tap for regulating the supply of gas. The gas tap is opened and acid is poured in via the funnel at the top. The uppermost section acts as a funnel to feed the lower section. There is no direct path from the top to the middle bulb. Sufficient acid is poured in to fill the bottom section and flood the solid in the center bulb. The gas tap is closed. Gas is produced and the pressure builds up inside the bulb, forcing the acid down into the bottom bulb and up into the top one. When the liquid is forced out of the center bulb the generation of gas stops. The apparatus is now set up ready for use. When gas is needed, the tap is turned on. The gas pressure in the center bulb is released. There is no extra pressure to hold the acid in the top bulb so it drops down to completely fill the bottom bulb and once more flood the solid. When the gas tap is turned off, as the gas can no longer escape, the pressure again builds up, forcing the liquid back into the top bulb or reservoir. The build up of pressure ceases when all drops of acid left clinging to the solid have been used up. In time, the acid grows weaker and the solid is used up. The chemicals need renewing. The acid is drained out by removing the bung from the lower bulb, after which the remaining solid can be taken out. This should be done in a fume cupboard to prevent the breathing of poisonous fumes. Because of its poisonous qualities and unpleasant smell of bad eggs, it is advisable to always keep a hydrogen sulfide Kipp's apparatus in the fume cupboard.