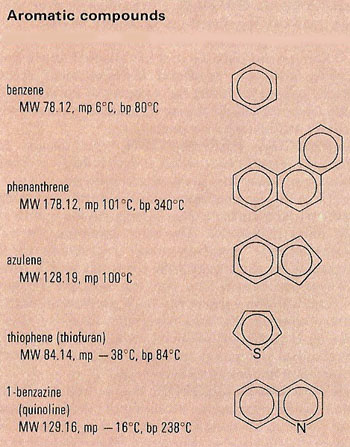 An aromatic compound is a compound containing at least one aromatic ring – a highly stable planar ring of atoms with resonance structures that consist of alternating double and single bonds, e.g., benzene. Aromatic compounds are so called because of their strong, characteristic odors. Compare with aliphatic compound.

Aromatic compounds contain one or more planar rings of atoms having special stability due to their electronic structure. This includes torus-shaped orbitals above and below the plane of the ring, known as l-electron systems, containing (4n + 2) electrons (i.e., 6, 10, 14, and so on). Such systems can be represented by resonance structures of alternate since and double bonds round the ring.

Typical properties of aromatic compounds include ease of formation, tendency to react by substitution rather than addition, and modification of the properties of attached groups. The most important aromatic compounds are benzene and its derivatives, including phenols, toluene, benzaldehyde, benzoic acid, benzyl alcohol, aniline, and salicylic acid. Compounds with more than one benzene ring (polycyclic) include naphthalene and anthracene. Non-benzenoid aromatics include cyclopentadienyl and cycloheptatrienylium ions and azulene. Many heterocyclic compounds are aromatic.