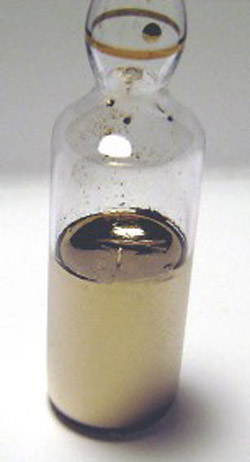 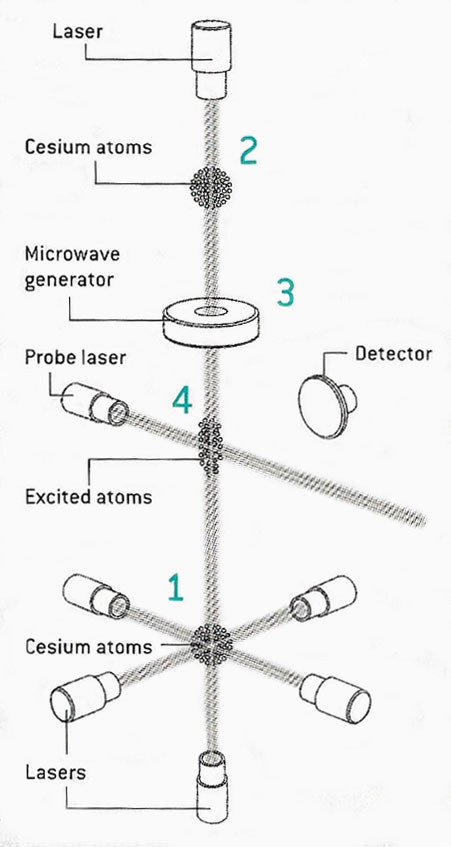 Cesium (Cs) is a soft, silvery, ductile, metallic element produced as a by-product of zinc refining and by reduction of cesium chloride (Fig 1). It is found mainly as the mineral pollucite. Cesium is one of the alkali metals, found in Group I of the periodic table. It is the most electropositive and alkaline of elements, turns to a liquid at only 28.5&#176C, and burns spontaneously in moist air. It is used in photoelectric cells, as a catalyst promoter, and to make special glass. The radioisotope cesium-137 can be employed in radiotherapy, but is now rarely used. The cesium (atomic) clock provides the standard measure of time: the electron resonance frequency of the cesium atom is exactly 9,192,631,770 cycles per second. Cesium has also been used in ion propulsion.

Cesium was discovered by Robert Bunsen and Gustav Kirchhoff in Heidelberg, Germany, in 1860. Its name comes from the Latin caesius meaning "sky blue."

Cesium fountain clocks (Fig 2) derive their timing reference from the frequency of an electron spin-flip transition that occurs in a cesium 133 atom when probed by tuned microwaves.

In a vacuum chamber, six lasers slow the movements of gaseous cesium atoms, forming a small cloud (1). A change in the operating frequency of the upper and lower lasers launches the atomic clock, fountainlike, up through a magnetically shielded cavity (2). As gravity pulls the cloud back down through the cavity, the electrons in the atoms are bombarded by a microwave generator (3) whose emissions are set to the predetermined frequency of a piezoelectric-crystal oscillator. The microwaves flip the spins of the electrons, changing their quantum-mechanical energy states. After the cloud falls farther, a laser probe causes the cesium to fluoresce, revealing whether its electrons have flipped their spins, a reaction that is monitored by a detector (4). The detector's output signal is then used to make the slight correction needed to tune the microwave emitter to a precise resonant frequency that can serve as the time beat for a clock.