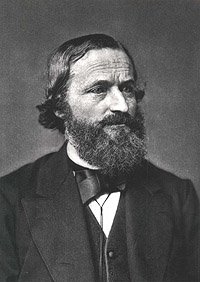 Gustav Kirchhoff was a German physicist who, with the chemist Robert Bunsen, laid the foundations of spectral analysis. In 1859 he realized that the Fraunhofer lines in the Sun's spectrum were due to light from the photosphere being absorbed at those specific wavelengths by elements in the solar atmosphere. This opened the way for others, such as Angelo Secchi and William Huggins, to develop astronomical spectroscopy.

Gustav Kirchhoff was born in Königsberg. He graduated from the University of Königsberg in 1847, lectured for a few years in Berlin and Breslau, and, in 1852 took on a position at the University of Heidelberg where he remained till 1875. After moving to Berlin, his failing health forced him to prematurely retire in 1886.

While still a student, Kirchhoff made important contributions to the theory of electrical circuits (see Kirchoff's laws, and in 1857 he showed that an alternating electrical current flowing in a zero-resistance conductor would flow at the speed of light. This provided an important stepping stone towards the electromagnetic theory of light formulated in the 1890 by James Clerk Maxwell.

Kirchhoff's most celebrated contributions to physics were in the field of spectroscopy. In collaboration with Bunsen, Kirchhoff founded the (then purely empirical) science of spectroscopy. Kirchhoff and Bunsen began by effectively inventing the spectroscope, a prism-based device that separated light into its primary chromatic components, i.e., its spectrum. They then began studying the spectral "signature" of various chemical elements in gaseous form.

The key observation made by Kirchhoff and Bunsen was that the spectral lines emitted by a gas occurred at the same wavelengths (in modern parlance) as the absorption lines observed when incandescent light (provided by Bunsen's now famous gas burner) shone through the same gas heated at the same temperature. Kirchhoff made the giant leap of then identifying the dark spectral lines observed in the solar spectrum, known since Joseph Fraunhofer's earlier work, with the emission lines observed by various heated chemical substances. In this manner Kirchhoff (1) demonstrated the existence, in the Sun, of many chemical elements isolated on Earth, (2) argued that the bulk of the Sun is comprised of a hot, incandescent fluid, and (3) firmly established the hot, gaseous nature of the solar atmosphere. The latter two points led to the rapid demise of William Herschel's hypothesis of a dark, cold sun surrounded by a luminous atmosphere, which Herschel had put forth on the basis of his sunspot model.

In the early 1860s Kirchhoff produced the first detailed map of the solar spectrum (ruining his eyesight in the process), while Bunsen busied himself with the spectroscopic discovery of hitherto unknown chemical elements (cesium in 1860, and rubidium in 1861). While subsequent spectroscopists improved greatly on Kirchhoff instrumental techniques, his work with Bunsen remains at the root of almost everything we know about the Sun and stars.

Kirchhoff's laws are two laws governing electric circuits involving Ohm's-law conductors and sources of electromotive force, stated by Gustav Kirchhoff. They assert that the sums of the outgoing and incoming currents at any junction in the circuit must be equal, and that the sum of the current-resistance products around any closed path must equal the total electromotive force in it.