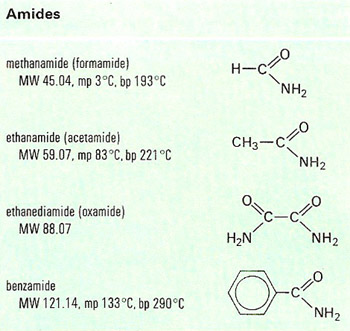 An amide is an aliphatic compound containing the group –CO.NH2 (the amide group), derived from carboxylic acids and ammonia by replacing the acid hydroxyl group by the amino group (NH2). N-substituted amides are derived from primary or secondary amines instead of ammonia. Other amides are derived analogously from inorganic oxy-acids or from sulfonic acids. Amides are prepared by reaction of acid chlorides, acid anhydrides, or esters with ammonia or amines, or by partial hydrolysis of nitriles.

Most simple amides are low-melting solids with strong hydrogen bonding, soluble in water. Methanamide (formamide) and N-substituted amides are liquids widely used as solvents. Amides are both weak acids and weak bases. They may be hydrolyzed to carboxylic acids, and dehydrated to nitriles. Metallic hydrides convert them to amines, and treatment with bromine and sodium hydroxide (the Hofmann degradation) yields amines with one fewer carbon atom. Polymeric amides (such as nylon) are used as synthetic fibers, and similar amid linkages join amino acids in proteins and peptides.

A polyamide is a man-made polymer with the generic name of Nylon, formed from the reaction between a dibasic acid (such as adipic acid) and a diamine (such as hexamethylenediamene). Nylon consists of long-chain synthetic polyamides in which the diamine and acid molecules are joined by amide linkages. It was first produced in 1938 by E. I du Pont de Nemours & Co., in the United States.