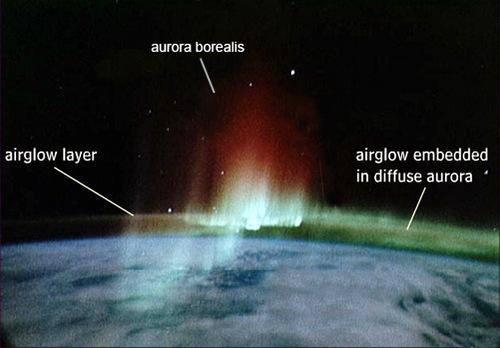 Airglow and Northern Lights seen from aboard the space shuttle. Credit: NASA.

An aurora is a glow in the ionosphere of a planet or a moon caused by the interaction between the object's magnetic field and charged particles from the Sun; "aurora" is Latin for "dawn." Aurorae have been observed on Earth, Jupiter, Saturn, Mercury, and Uranus, and are expected to occur in some form on all worlds that have magnetospheres. They are distinguished from airglow by their confinement to magnetic polar and subpolar regions, and their sporadic occurrence.

Different auroral colors stem from emission by different atmospheric gases. On Earth, the northern and hemisphere versions are known as aurora borealis ("Northern lights") and aurora australis, respectively. Aurorae change in brightness, shape, color, dynamics, and location in response to changes in the state of the magnetosphere. This variability shows up most dramatically during an auroral substorm.

Auroral ovals are the two oval-shaped belts on the Earth in which aurorae occur. They are disposed asymmetrically around the geomagnetic poles. During the day, they are about 15 degrees of latitude from the poles increasing to 23 degrees during the night. Their position and width both vary with geomagnetic activity.

The auroral zones are the zones on the Earth's surface where the occurrence of observed night-time aurorae is a maximum. The zones are located at latitudes of about 67 degrees north and south, and are about 6 degrees wide.