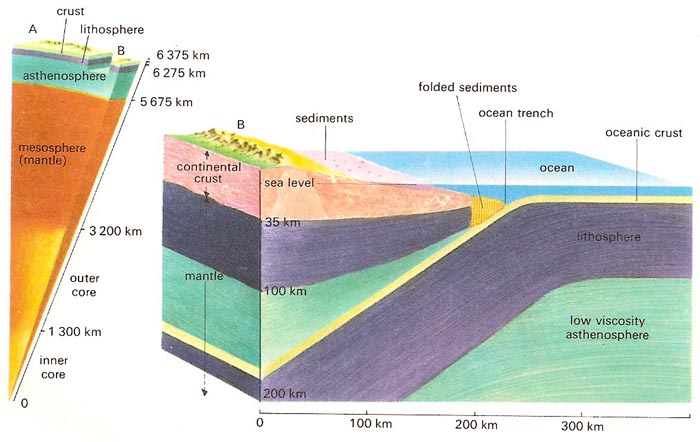 The structure of Earth. (A) A solid section of Earth from the center to the surface. (B) A 200-m-deep section through the crust and upper mantle showing a subduction zone where a plate of continental crust is advancing over an oceanic plate. A tongue of oceanic crust and lithosphere plunges down into the asthenosphere, remaining identifiable down to depths of about 700 km. 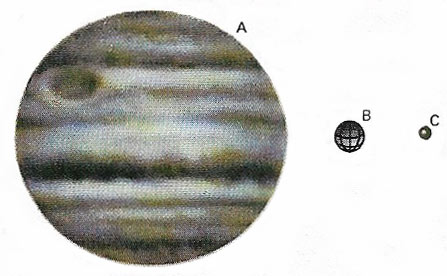 Relative sizes of Jupiter (A), Earth (B) and Mercury (C). Jupiter is the largest planet, Mercury the smallest; Earth is intermediate in size, but much more nearly comparable with Mercury. Earth is in fact the largest of the so-called terrestrial planets (Mercury, Venus, Earth, Mars) but far inferior to the smallest of the giants (Uranus). 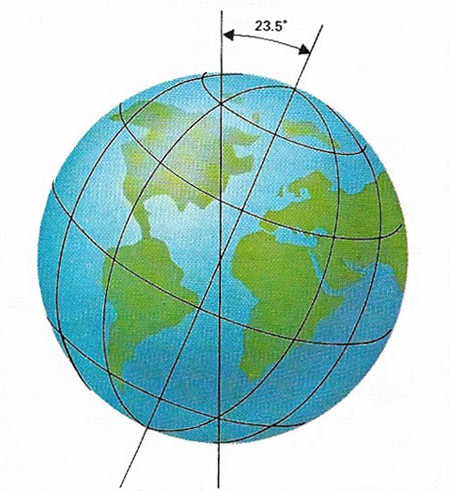 Earth's axis is inclined at 23.5 degrees to the perpendicular to the orbital plane. This causes the seasons; the varying distance of Earth from the Sun has only a minor effect. 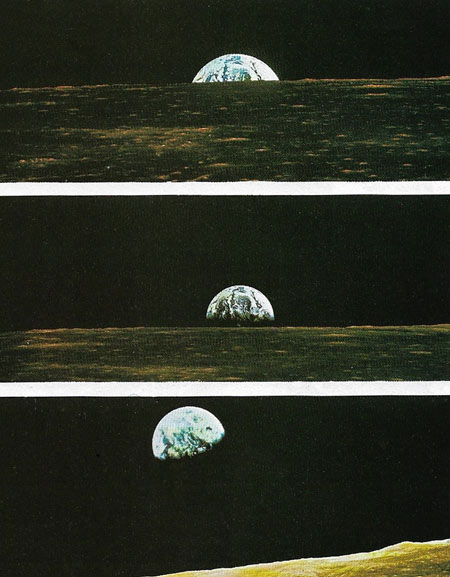 Apollo 10 sent back these pictures in May 1969; it was the second vehicle to take men round the moon. The pictures show Earth coming into view as the spacecraft comes from behind the far side of the Moon, from which Earth can never be seen. In the first photograph the sharpness of the lunar horizon is particularly notable; there is no lunar atmosphere to cause the slightest blurring or distortion.

Earth is the third planet of the Solar System and the only world in space on which it is certain there is life. Liquid water covers 70.8% of its surface to an average depth of 3,900 m and played a crucial role in the origin and evolution of terrestrial organisms (see life, origin). Volcanism and impact cratering (see Earth impact craters) are also in evidence, although the dominant geological process is erosion and deposition by water or ice.

Earth has a relatively thick atmosphere composed of 76% nitrogen, 21% oxygen, 1% argon, plus traces of other gases including carbon dioxide and water vapor (see Earth, atmosphere). The interior of Earth is, like that of the other terrestrial planets, divided into an outer silicate-rich solid crust, with a highly viscous mantle, an outer liquid core that is less viscous than the mantle, and a solid inner nickel-iron core. Convection currents in the material of the outer core give rise to a weak magnetic field. Earth is unusual in the solar system in having a terrestrial planet-like satellite, the Moon, that is about one-quarter of Earth's diameter. By coincidence, the Moon is just far enough away to have, when seen from Earth, the same apparent angular size as the Sun, enabling total solar eclipses to be seen.

Earth's rotation causes it to bulge at the equator and, as a consequence, be slightly flattened at the poles. This bulge causes the planes of satellite orbits inclined to the equator (but not polar) to rotate slowly around Earth's axis.